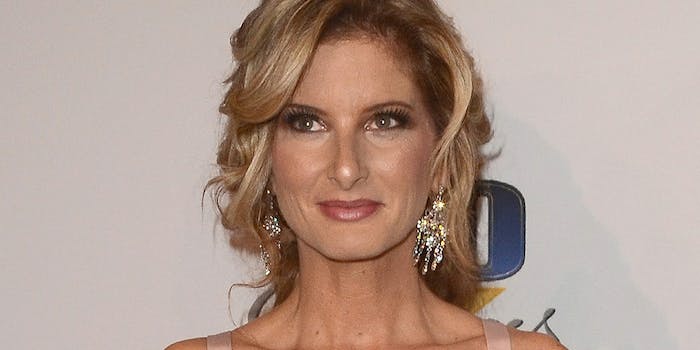 A judge will consider whether her defamation suit against Trump will proceed.

Three weeks before the 2016 presidential election, season five Apprentice contestant Summer Zervos told the press that then-Republican presidential candidate Donald Trump had kissed her, grabbed her breasts, and thrusted his genitals at her in 2007. On Tuesday, after more than a year following Zervos’ accusations—which Trump said are lies—and her resulting defamation suit against him, a New York judge will hear her oral arguments, and decide whether the suit may proceed.

In 2016, when Zervos came forward with her allegation, she recounted the incident alongside her famed attorney, Gloria Allred. She told reporters that after Trump “fired” her from the TV show (for interrupting Trump while he was attempting to fire someone else, saying she was fired for her “stupidity”), she thought he could be “a possible mentor and potential employer” at the Trump Organization.

When Trump met her for lunch, Zervos said she was surprised he had kissed her on the lips when he arrived and said he kissed her again when he departed. Days later, Zervos said Trump invited her to meet him at a hotel in Los Angeles, where she lived, but had her meet him in a bungalow instead of a restaurant. She said when she arrived, he kissed her again, but when she tried to make conversation, he grabbed her shoulder, began kissing her “very aggressively” and placed his hand on her breast. When she pulled back and walked away, he took her hand and walked her into the bedroom:

I walked out. He then turned me around and said, “Let’s lay down and watch some telly telly.” He put me in an embrace and I tried to push him away. I pushed his chest to put space between us and I said come on man, “Get real.” He repeated my words back to me, “Get real,” as he began thrusting his genitals.

He tried to kiss me again and, with my hand still on his chest, I said, “Dude, you’re trippin’ right now,” attempting to make it clear that I was not interested. He said, what do you want? I said I came to have dinner. He said, “OK, we will have dinner.” He paced around the room. He acted like he was a bit angry. He pointed out that someone had delivered a fruit basket. I felt it was to show me how important he was.

Zervos was the 15th woman to publicly accuse Trump of sexual harassment or assault prior to the election. She wasn’t even the only one to make her statement public that day. Kristen Anderson, a former model, had told the Washington Post that Trump had reached up her skirt and touched her vagina through her underwear without her consent in the early 1990s. The piece was published hours before Zervos’ press conference with Allred.

Trump denied the accounts, calling Zervos and the other women liars, and threatening to sue them once the election ended.

“False stories. All made up. Lies. Lies. No witnesses. No nothing. All big lies,” the then-candidate said at a rally in Bangor, Maine.

Zervos asked Trump to retract his statements, saying she had been bullied, threatened, and saw her business targeted as a result. Then, in January, Zervos sued Trump for defamation in New York State Supreme Court, a tactic used to litigate sexual misconduct cases and an opportunity Trump opened when he called Zervos a liar. In suing for defamation, accusers are able to circumvent issues that could complicate a suit for sexual assault or harassment, such as allegations that are out of the statute of limitations.

“It’s almost a train you can’t stop going down the tracks,” Joseph Cammarata, who represented Paula Jones against President Bill Clinton, and seven Cosby accusers, told the Washington Post. “It opens him up to have to answer questions about sexual relations, other relationships, what might have been said, to open up your whole life.”

In March, Allred and her co-counsel Mariann Meier Wang subpoenaed Trump’s campaign for documents concerning Zervos or “any accusations that were made during Donald J. Trump’s election campaign for president, that he subjected any woman to unwanted sexual touching and/or sexually inappropriate behavior.” BuzzFeed News reported that the subpoena wasn’t entered into the court file until September, however, when Allred and Wang filed it to dispute claims from Trump’s legal team that the subpoena was too broad.

In October, White House press secretary Sarah Huckabee Sanders confirmed Trump’s original response to the allegations, stating that the women are lying. Trump’s lawyers, meanwhile, have tried to get the suit dismissed or delayed until after his presidency, claiming that he’s protected from civil lawsuits in state court while president, and that Zervos’ suit is “politically motivated.” His lawyers also say that Trump calling Zervos and other women liars is protected political speech under the First Amendment.

According to the Post, if after Tuesday’s oral arguments the judge deems Zervos’ case can move forward, Allred and Wang could collect and publicize incidents from Trump’s past, and call him to testify.