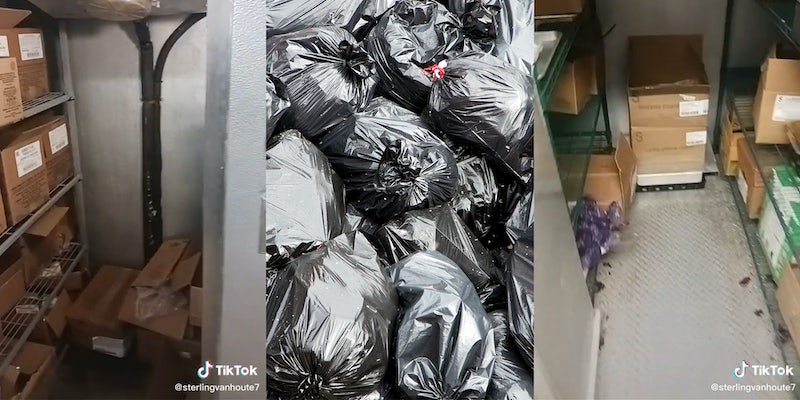 ‘Half the sh*t goes bad before we get a chance to sell it’: Subway worker says restaurant gets very little business

In a viral TikTok video, a Subway employee wonders how his store makes any money, claiming that so few customers come into the location that half of the food they’re required to keep on hand ends up going bad.

The worker, Sterling (@sterlingvanhoute7), describes a work situation some would find enviable: collecting a paycheck to just spend time on their phone and make the occasional sandwich for people walking into a largely desolate Subway store.

“Now I do enjoy this job, but like I just wanted to show you how little business we get in here, look,” Sterling says in the clip. “I’ve never—I’ve worked at a lot of restaurants—I’ve never seen a walk-in this small. I could touch the end of it without even entering. And half the shit we have goes bad before I even get a chance to sell it.”

He then adds that the Subway store is required to keep the inventory in stock, the ingredients for the cold cut combo, for example.

“I’ll probably sell half of it before it goes bad and then we gotta throw it out,” he explains. “But it’s not like we can just take it off the menu. I’ll work like seven hours, maybe eight hours, here, and I barely get 20 people. I don’t know how they can afford to pay me, but fuck it. I’m just on my phone watching TikTok all day.”

Several of Sterling’s over 17,000 viewers had ideas as to what the deal at his Subway could be.

“That’s exactly how mine is. we get so little business. we’re bored to death sitting on our phones all day. but we have a drive thru and it gets busy,” one user shared.

Another user suggested that the Subway work with a local food bank to reduce food waste. “Pair with your local food bank,” they said. “They can check in weekly for products you might throw . Subway has forms for donation approval.”

Some speculated that this particular store was a shell company or a front store of some kind that was being used to launder money.

“Tell me you work for a shell company and have no idea without telling me you do,” one viewer said.

“They either write off the losses or the business is a front for something else,” another claimed.

Others thought that this was just one of many stores that the business owner had in their possession and the profits from the other stores were helping to keep this one afloat.

“Buisness like that keep y’all in buisness even if it loses money just so subway can stay in option to take buisness from someone else,” a further TikToker speculated.

Several users told the TikToker to be thankful that there was very little to do at work.

“Got to be subway, I met a location OWNER who laid off his own staff and runs it himself and barely breaks even because of all the other locations near,” a second wrote.

The Daily Dot has reached out to Sterling and Subway via email for further information.