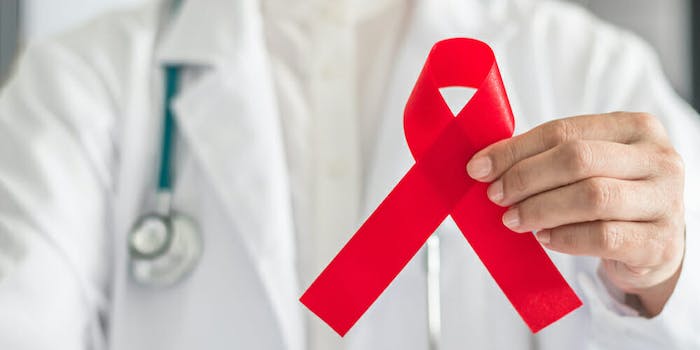 In nearly 1,000 couples studied, no negative partner contracted HIV from his positive partner.

The study was published yesterday in the medical journal The Lancet and is the result of an eight-year-long study following nearly 1,000 gay male couples in Europe, the largest study that has been done yet on HIV treatment. In each couple one partner was HIV-positive, and one was HIV-negative, and they had sex without condoms. Fifteen of the HIV-negative participants contracted HIV during the course of the study, but the researchers conducting the study used genetic testing to determine that none of them had contracted HIV from their partner who was taking ART.

“These important results serve to inspire and challenge us. Timely identification of HIV-infected people and provision of effective treatment lead to near normal health and lifespan and virtual elimination of the risk of HIV transmission. Yet maximizing the benefits of ART has proven daunting,” says the abstract for the study. “Fear, stigma, homophobia, and other adverse social forces continue to compromise HIV treatment.”

Both medical professionals and people with HIV celebrated the news on social media. Since the HIV/AIDS epidemic began more than 35 million people have died as a result of the illness, including nearly a generation of LGBTQ people in the 80s and 90s. For those who survived that time, HIV is changing from a death sentence to something that can be treated and lived with.

As a gay man, diagnosed with #HIV only eight years ago (2011), I'm actually quite emotional seeing today's headlines.

When I was #diagnosed I knew nothing about HIV. I thought I'd never have sex again, I never thought I'd be loved again, I even thought I was going to die. 1/6 pic.twitter.com/dQWJigXz6n

Another boost to our conviction that #UequalsU and hopefully to the fight against #HIV stigma. Discussing U=U with patients has been a gift, leading to some of the most profound conversations I’ve had in medicine. Also, there’s never enough Kleenex. https://t.co/jC7iMhSQZ8

Delighted that Maurice and I took part in such a historic study. I take my meds, he stays negative and that's it. #UequalsU pic.twitter.com/4lxk0MG42e

In addition to saving lives, there is hope that this study will reduce the stigma and discrimination HIV-positive people face in many aspects of life. In the U.S. gay men are not allowed to donate blood unless they have been celibate for a year, due to HIV-related stigma. Globally, there are still many countries where being HIV positive is criminalized and may result in deportation.