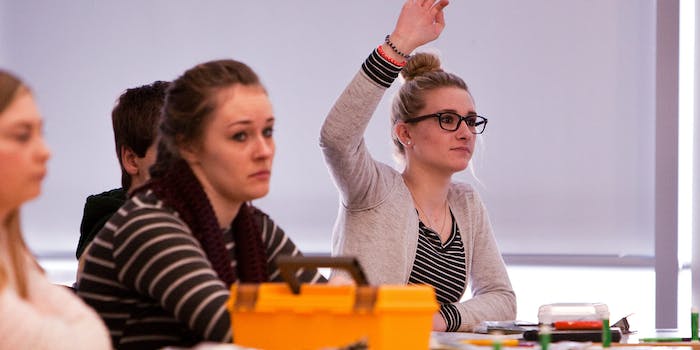 Should kids really ‘be a distraction’ during school shootings?

In the wake of the Parkland, Florida high school shooting that left 17 dead, American parents and teachers are more concerned than ever about their children’s safety in public schools. Case in point, a Facebook post is going viral after a parent claimed police officers recommend kids “be a distraction” during an active shooter incident.

Lisa Guthrie of Redmond, Washington, turned to Facebook on Wednesday after police came to a PTA meeting and talked about ALICE, a training system by the ALICE Training Institute that stands for “Alert Lockdown Inform Counter Evaluate.” During the training segment, police officers explained that children should confront the shooter if need be and act aggressively.

“One part of it is that if the shooter does enter the room where kids are at, the kids are told to run around, yell loudly, throw things like books or wads of paper, etc.,” Guthrie said in her Facebook post. “Just be a distraction.”

At first, Guthrie didn’t understand. But she then came to a realization: ALICE is recommending kids sacrifice themselves to prevent the shooter from killing other people. If kids “counter” the shooter, they can stall the perpetrator and prevent more people from getting hurt.

“And then it punched me in the gut: If [my daughter is] face to face with a shooter, she’s going to die regardless,” Guthrie said in her post. “The goal will be for her and her classmates to make their deaths take 20 seconds rather than 10. That’s 10 more seconds for other kids to run, 10 more seconds for first responders to get to the scene and take out the shooter. A lot of lives can be saved in 10 seconds…”

This, Guthrie explained, shows just how dire the American school shooting epidemic is throughout the nation. It’s now the students’ jobs to save others by making their potential demise last as long as possible.

“Just to be clear, this is the current state of affairs: We live in a country where kindergartners learn how to maximize the number of lives they can save as they’re being massacred,” Guthrie wrote on Facebook.

The tactic Guthrie described is pretty terrifying. But it’s not exactly how ALICE works. The training system is a little bit more complicated, and the “counter” tactic is only encouraged as a last resort, not a first. It isn’t explicitly taught in an attempt to save as many lives as possible, either.

In short, ALICE operates off the “run, hide, fight” emergency survival plan, which encourages civilians caught in mass shootings to run away if possible, hide if it’s unsafe to evacuate, and fight if in imminent danger. ALICE was created for school districts in response to Columbine, and it essentially reappropriates tactics intended for adults and brings them into school settings.

An ALICE training video recorded in the Akron, Ohio, public school system drives home this point. In the video, a police officer teaches students how to protect themselves during an active shooter incident and largely emphasizes the “run” and “hide” parts of ALICE over fighting. Above all, the police officer says students should listen to their teachers.

In one example, a teacher evacuates her students from her classroom, bringing her class away from the school. In another, students work together to barricade a room by propping up chairs and desks over a door, protecting students from a potential active shooter. It’s only after these two segments that the police officer finally tackles ALICE’s “counter” tactics, stressing that if a “bad guy” tries to grab or hurt a student, students should do whatever they can to get away and protect themselves. Not unlike “stranger danger” training.

“I don’t want you guys to hide in the corner if there’s a bad guy in your room. Or I don’t want you to hide under your desks,” the officer tells students. “If there’s really a bad guy here, and he can see us, that’s time for us to run, scream, and get away.”

The U.S. Department of Homeland Security tells people caught in mass shooting incidents to act “as aggressively as possible” against the shooter, but the department’s plan is mainly intended for workplace settings. Meanwhile, a 2013 school emergency operations plan from the Obama administration stresses that faculty and staff in danger should consider incapacitating or distracting the shooter by “using aggressive force and items in their environment,” such as fire extinguishers or chairs, but the administration does not encourage students to do any of the fighting. ALICE is one of the few emergency plans that outright encourages students to fight back—and even then, it’s only after “run” and “hide” have been exhausted.

Very little research is available on ALICE’s effectiveness, particularly when it comes to fighting back against active shooters. Campus Safety stresses that the “fight” in “run, hide, fight” shouldn’t be taught in schools, as children may experience “unnecessary fear by preparing them for something that is unlikely to affect them.” And Ken Trump, a school security expert and consultant at the National School Safety and Security Services, argues ALICE applies adult tactics into a school setting that may not be appropriate for children.

“I have written extensively on my website and in a series of blog articles about the implementation considerations, risks, and potential safety and legal liability posed by ALICE training,” Trump writes in a post on the training method’s problems. “While perhaps well-intended, ALICE training may not be well-thought-out by many pre-K-12 school leaders and program advocates.”

At our ALICE training, a cop held a gun to ten teachers in lockdown. He pointed it at them, one by one, and said bang! each time. This was my district's official response to the Parkland shooting today: pic.twitter.com/xmGOgyt61g

Watching a young girl who hid in a classroom, on tv yesterday, it struck me that they had actually had lessons on what to do if a shooter got into the school. Surely that is a Heart breaking enough reason to strictly control the guns over there, at the very least.

While it’s true that ALICE technically teaches students to serve as distractions during school shootings, it doesn’t mean that it’s the best training method out there, nor does it mean that distracting a shooter will necessarily save lives. While America’s mass shooting problem is clearly getting worse, perhaps taking away the tools to commit mass shootings is the key, not necessarily asking students to do the fighting themselves against a gunman.