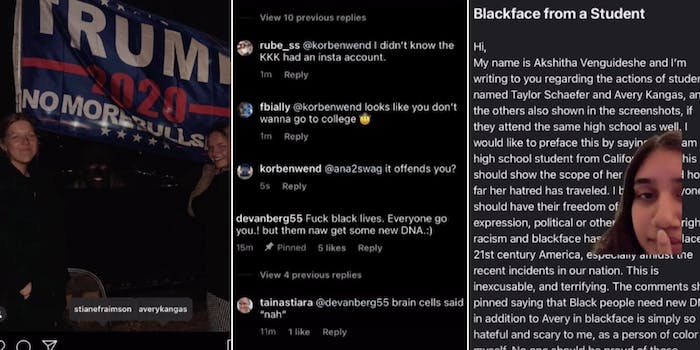 A comment on the photo reads, 'F*ck Black lives.'

A recent viral TikTok shows three high school students posing in front of a Trump 2020 flag, with one of them wearing blackface.

TikToker Akshitha Venguideshe (@akshitty_) uploaded the video, which superimposes her face over a screenshot of the offending Instagram post from @taylorschaeferr. In it, three girls pose in front of a flag that says “Trump 2020: No More Bullshit.” The girl in the middle of the photo is perched underneath the flag, grinning at the camera while wearing blackface. The Instagram caption reads, “Now open: liberal museum.”

The comments under the Instagram post are damning. User @korbenwend wrote, “Issa n***a in the back!” while @devanberg55 commented, “Fuck black lives. Everyone go you.! but them naw get some new DNA.:)” In a second comment, @devanberg55 wrote, “Imma just end all the confusion last time black lives mattered was before 1863 when they worked.! Thank you for your time.”

The TikTok has earned more than 168,000 views since being posted on Monday, and its contents have migrated to Twitter as well. Several social media users identified the three girls in the blackface photo as Taylor Schaefer, Stiane Fraimson, and Avery Kangas. They are allegedly students at the Hamlin School District in Hayti, South Dakota.

In her video, Venguideshe also included a screenshot of the email she sent to the Hamlin School District’s middle and high school principal, Jeff Sheehan. She called the post “inexcusable” and “so hateful and scary to me, as a person of color myself.” She further argued that “no one should be proud of these actions, especially not on social media.” In the caption of her TikTok, Venguideshe urged other viewers to email the school and demand that the students in the blackface post be disciplined.

As of Wednesday morning, the three girls in the photo appear to have made their Instagram accounts private or deleted them entirely. In a follow-up TikTok, Venguideshe said she talked to another student who went to school with the girls in the blackface photo, and “apparently the whole town is really racist so they probably won’t get expelled.”

Patrick Kraning, superintendent of the Hamlin School District, confirmed to the Daily Dot that two Hamlin students were involved in the photo, but the “student in blackface is not known to us.”

“As a school district, we need to continue the discussion and recognition that one of the biggest issues that we have to overcome in South Dakota and in the United States is the lack of ‘real life’ experience with people of color and the growth of empathy that comes from personal experience in race relations,” Kraning said in a statement. “Ignorance is not an excuse for our students, and it is not an excuse for anyone else in the United States in 2020.

“That is where the Hamlin School District stands – racism in any form will not be tolerated,” the statement continued.  “With that being said, it would be unprofessional and illegal for administration to discuss a specific student discipline situation, but we support and will work with local law enforcement and authorities.”