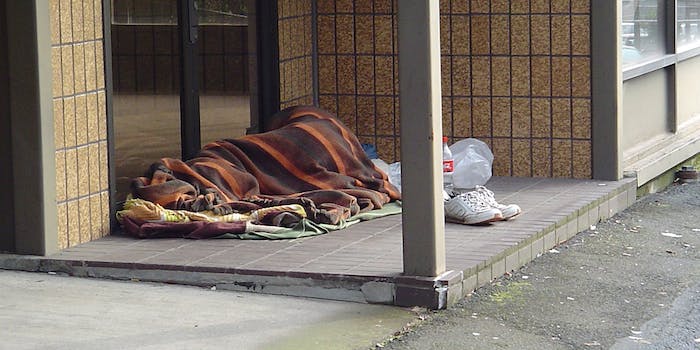 Student’s crowdfunding campaign raises over $40,000 for her town’s homeless residents

He gave her his last $5, so she gave him a miracle.

The holidays aren’t even here yet, but this story about a British student who crowdfunded ￡27,000 ($42,000) for a homeless man has us feeling the spirit of the season.

Dominique Harrison-Bentzen, 22, is a student of fashion and brand lifestyles at the University of Central Lancashire. Two weeks ago, in her hometown of Preston, she lost her bank card. As she fretted about how she would get home, something remarkable happened: A homeless man approached her and offered her his last ￡3 ($5). She refused the man’s gesture, but was so moved by it that she later returned to Preston and attempted to find out more about him.

Her investigation turned up stories of the man, whose name was Robbie, offering similar acts of kindness to others. She decided to do what she could to give something back. On Facebook, she wrote:

The more I spoke about him the more kind gestures I learnt about such as him returning wallets untouched to pedestrians and offering his scarf to keep people warm. I was lucky enough to find him again and his name is Robbie, he has been homeless for 7 months through no fault of his own and needs to get back on his feet but cannot get work due to having no address. So that’s when I decided to change Robbie’s life and help him, as he has helped many others.

Harrison-Bentzen decided to raise money for a security deposit on a new apartment for Robbie. First, she spent 24 hours on Dec. 16 living as a homeless person in order to experience Robbie’s life and better understand the challenges he faced.

Then, Harrison-Bentzen set up a fund for Robbie on crowdfunding website GoGetFunding, inviting each of her followers to donate ￡3, the amount Robbie had offered her when she needed to get home.

“Together,” she wrote, “our small act of kindness can change someone’s life this Christmas and finally get him off the streets safe and warm.”

Her followers did more than that. Her campaign went viral on social media, with donations and media attention pouring in from all over the U.K.

The influx of attention repeatedly crashed GoGetFunding’s website. At press time, the campaign had raised over ￡27,000, or about $42,000. Its Facebook page had 12,000 followers.

Harrison-Bentzen stated on Facebook that they would be using the extra funds to help other homeless people in Preston. “Robbie has already suggested some local charities within Preston who have helped not only him but others throughout their hardship,” she wrote in a note to supporters.

The campaign may have helped Robbie and numerous other homeless citizens of Preston, but it’s undoubtedly also helped Harrison-Bentzen. She is currently campaigning to be crowned pageant queen of Preston. With an appearance tonight on the BBC, we’re guessing she’s a shoe-in.