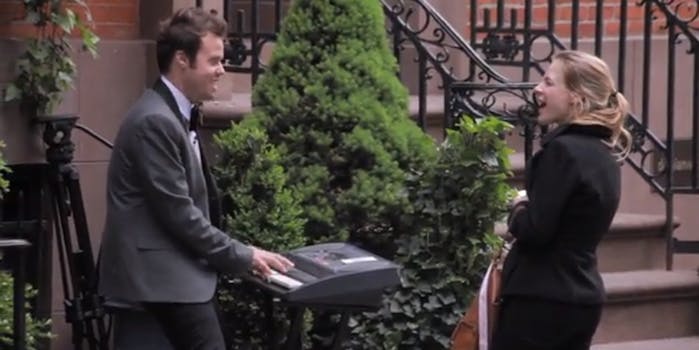 Street performer answers song requests in the most unexpected way

This simple request might sound creepy in any other context, but it turned out to be a reward for the people who took a chance.

Street musicians might make your morning a little brighter, but if you encounter the right one, it can make your day.

CDZA, a Web-savvy classical group based in New York City, set up shop for their prank in the West Village in May with a street musician playing tunes on an electric keyboard.

For the few that engaged him in conversation with a request, he offered them a proposition: Give him two minutes and enter Fedora, the restaurant located just below them.

“This is gonna be the most relaxing morning of your life,” he said. “I promise.”

That simple request might sound creepy in any other context, but it turned out to be a reward for the people who took a chance.

The next time you encounter street musicians, give them a few minutes of your time. You never know what could happen.