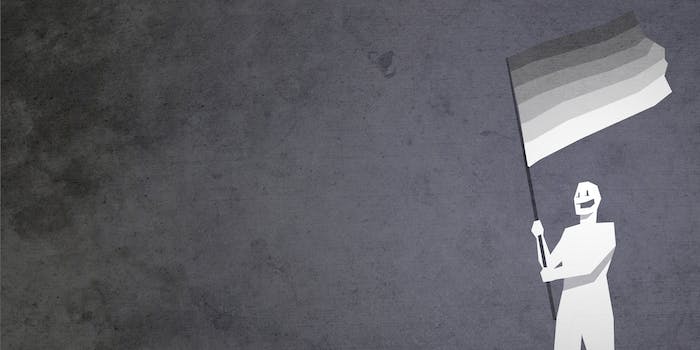 Straight Pride Day is a joke, but it has serious and ugly roots

We can laugh at it, but Straight Pride really means anti-LGBT.

For years, oppressed heterosexuals have been pushing for a Straight Pride Day.

No, really—they have. On Wednesday, the hashtag #HeterosexualPrideDay reared its head and caused titillation and mockery, as it quickly rose to the top of Twitter’s trending column—thanks to this guy, “Sam,” who is taking credit for starting the hashtag and the latest attempt at such a holiday.

Most of the tweets appearing under the hashtag were sarcastic remarks from LGBT rights supporters who ridiculed the concept and highlighted the lack of obstacles people face for being heterosexual.

when your identity is by default the majority, every day of history is already a celebration of you. #HeterosexualPrideDay

In red, are all the countries where you can get killed for being heterosexual #HeterosexualPrideDay pic.twitter.com/2fsmETEPGn

But what sounds like a joke is a very real phenomenon that appears to have originated in the late 1980s and early 1990s as a backlash to the then-emerging presence of LGBT pride parades and festivals. This so-called joke is actually rooted in very real hatred and fear.

Students at the University of Massachusetts held a straight pride rally in 1990, waving homophobic signs and American flags. According to the New York Times, the term “straight pride” was just a new code phrase for anti-gay.

”I’m against homosexuality because I think it is perverse. It goes against God’s law,” the Times quoted rally leader Theordore Maravelias as saying. ”I don’t want my tax money subsidizing a gay week.”

“Straight pride” was the phrase that united anti-LGBT students at a Tennessee high school this January, where students wore signs bearing the slogan in order to voice opposition to a gay-straight alliance (GSA) club that one parent compared to ISIS. Students also defaced GSA flyers with slurs like “f**gots” and “no gays allowed.”

The trend seems to rear its head every couple of years in response to any increase in LGBT rights or visibility. In Sao Paulo, Brazil, in 2011, a city council member wrote legislation to enact a Heterosexual Pride Day. Carlos Apolinario told TIME that his bill was “not anti-gay but a protest against the privileges the gay community enjoys.” But he also said that a straight pride day would “safeguard the morals and good customs,” insinuating that LGBT people were immoral.

Any discussion of the straight pride movement would not be complete without a nod to Seattle’s sad attempt at hosting a Straight Pride Parade in 2015—when only the organizer showed up. Anthony Rebello’s one-man celebration featured a lonely cluster of black and white balloons last year, but a Facebook event page for this year’s “Heterosexual Parade” shows 188 people planning to attend. [Disclosure: Rebello recently messaged the author on Facebook, angry that he was referred to as a potential white supremacist in a previous article in relation to his wearing the Iron Cross symbol.]

Whether the straight pride movement claims to celebrate heterosexuality on equal terms, or paints itself as a light-hearted joke in response to LGBT pride festivals, it is neither. Straight pride is a concept born out of resentment and opposition to equal rights for lesbian, gay, bisexual, and transgender people—and the LGBT community isn’t buying it.