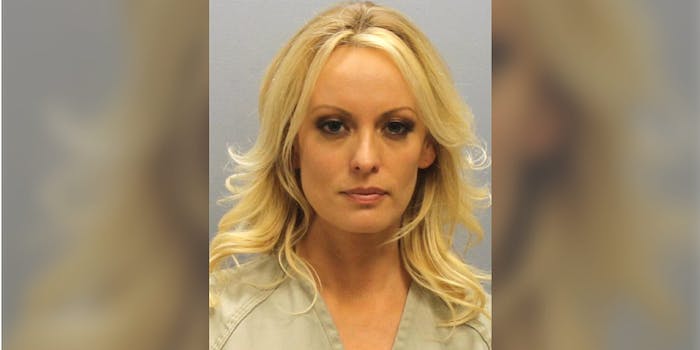 Stormy Daniels will reported plead not guilty to all charges.

According to Franklin County Municipal Court records, Daniels, whose real name is Stephanie Clifford, faces three misdemeanor charges of touching a patron while operating a “sexually oriented business,” a violation of Ohio law. She posted bail on Thursday morning.

Michael Avenatti, Daniels’ lawyer, tweeted in the early hours of Thursday morning that his client’s arrest was “set up and politically motivated,” and “reeks of desperation.” He also tweeted that she will plead not guilty to all “bogus charged.”

Avenatti also tweeted that Daniels allegedly touched patrons during “the same act she has performed across the nation at nearly a hundred strip clubs.”

Just rcvd word that my client @StormyDaniels was arrested in Columbus Ohio whole performing the same act she has performed across the nation at nearly a hundred strip clubs. This was a setup & politically motivated. It reeks of desperation. We will fight all bogus charges. #Basta

She was arrested for allegedly allowing a customer to touch her while on stage in a non sexual manner! Are you kidding me? They are devoting law enforcement resources to sting operations for this? There has to be higher priorities!!! #SetUp #Basta

We expect her to be released on bail shortly. We also expect that she will be charged with a misdemeanor for allowing “touching.” We will vehemently contest all charges. #Basta

According to CNN, an employee who “regularly appears nude or seminude” cannot touch patrons on the premises of a sexually oriented business, unless that person is a family member.

CNN affiliate WSYX reported that undercover officers at the Sirens Gentlemen’s Club in Columbus said they saw Daniels remove her top and “force patrons’ faces into her chest,” as well as touch the breasts of female patrons. The officers then approached the stage, at which point Daniels leaned over and “shoved each of their faces between her breasts.” Daniels allegedly also touched a third officer’s buttocks and breasts. Two other people were arrested in addition to Daniels.

WATCH: Stormy Daniels was arrested on Thursday for allegedly allowing a customer at an Ohio strip club to touch her https://t.co/NPhCWorgDf pic.twitter.com/tCWMvkJd4F