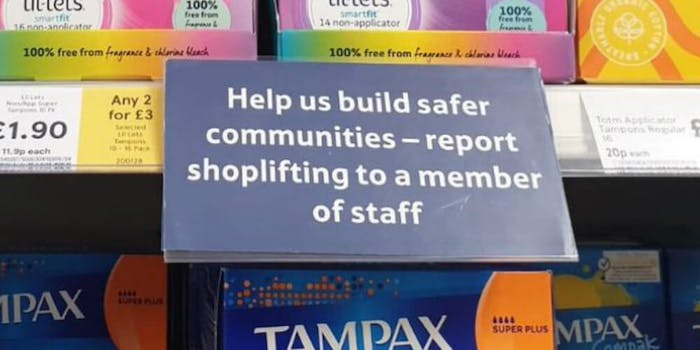 A store is receiving backlash for a sign that asks customers to snitch on tampon thieves.

It’s rare to see people agree on social media, but one woman’s tweet about shoplifting has everyone in consensus about right and wrong.

Twitter user @oonskie posted a photo Wednesday of a store sign that reads, “Help us build safer communities–report shoplifting to a member of the staff.” The sign is notably located in front of boxes of tampons and pads.

“Spotted by @HMPSurvival. We really need a genuine conversation as a society about what ‘safety’ means,” oonskie tweeted.

Spotted by @HMPSurvival. We really need a genuine conversation as a society about what 'safety' means. pic.twitter.com/jrH2rx6h3W

Twitter users quickly banded together to defend the hypothetical shoplifters. “If I see someone shoplifting pads or tampons im helping them like we in this together now fam,” Twitter user @INDIEWASHERE wrote.

noah fence but if i see someone shoplifting pads or tampons im helping them like we in this together now fam https://t.co/LNSODV9Rtq

help us build safer communities – if you see someone shoplifting fuckin tampons cover for them https://t.co/t9ZirJU5H3

Others were similarly quick to look the other way. “If I see someone stealing tampons my lips are SEALED eyes SHUT didn’t see a thing,” Twitter @emmymhartman wrote.

If I see someone stealing tampons my lips are SEALED eyes SHUT didn’t see a thing https://t.co/dqe1KNDo0X

if i see someone stealing feminine hygiene products of all things from a huge chain supermarket, i’m minding my business…. and you should too. https://t.co/1vcSMMBTmU

Some users pointed out the difference between a community and a grocery store.

“Don’t grass on your class: Tesco’s board of directors is *not* your community,” Twitter user @dogsectionpress wrote.

Don't grass on your class: Tesco's board of directors is *not* your community https://t.co/cAQnvjjxPt

Tampons and pads are still subject to a higher tax than other “necessities,” like food and medicine, and can be hard to access in public spaces, so many users took the opportunity to advocate for free and accessible sanitary products.

“Shoplifting isn’t the problem. It’s the fact that sanitary products aren’t free and accessible to those who menstruate,” Twitter user @TaylorEenaHoe wrote.

Shoplifting isn't the problem. It's the fact that sanitary products aren't free and accessible to those who menstruate. https://t.co/eCg3YUsNCu

If the government can offer free condoms then they should offer free sanitary products. https://t.co/DHYrzXBeQo

In Sex Ed the boys are given free condoms but the idea that tampons should be as easily accessible is non existent. Sex is a choice, my menstral cycle is not. But I can clearly see what comes first. https://t.co/vLxPGHj7lV

“If i see someone stealing pads, I’m helping them out because a safer community is when someone doesn’t have to steal for a basic need,” Twitter user @JaysVillas1 wrote.

A safer society is one where no one needs to steal tampons because they can't afford them. https://t.co/z2tBQv22xI

Though the signs were allegedly posted all over the store, not just by the tampons, Twitter users were nevertheless outraged. The “tampon tax” or “pink tax” has become a hot-button issue in recent years. While some personal care items, like ChapStick and Viagra, are exempt from higher sales tax, tampons and pads are not. Consumers point out that even though the tax may seem small, it adds up over time–as women on average get their period once a month for roughly 40 years, and they end up paying more than some say they should for basic hygiene.