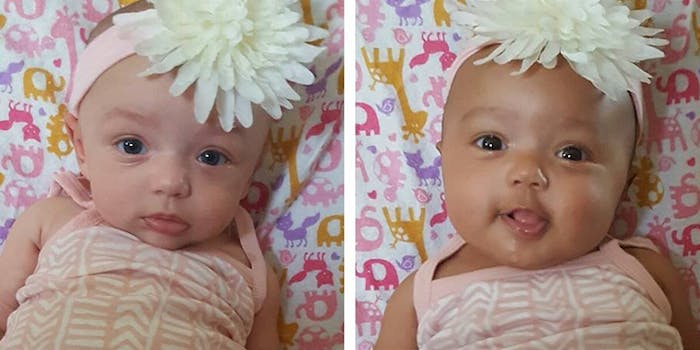 These ‘miracle’ biracial twins are not the solution to racism

Twins with different skin colors will not fix our prejudices.

You know what’s weird? Genetics. Sometimes two parents will have brown hair and their kid will be a redhead. Sometimes their kid’s skin will be darker or lighter or have more freckles. It’s the nature of genes that none of us come out a perfect 50/50 combination of our parents. And yet whenever this happens to children of an interracial couple, we tend to treat the kids like zoo attractions.

The latest instance is around a pair of fraternal twins in Illinois born to a black father and a white mother, one of whom has pale skin and blue eyes, and the other whom has darker skin and brown eyes. This is a totally understandable occurrence from a genetic standpoint, and yet their mother, Whitney Meyer, is calling them “miracle babies,” saying she and her boyfriend “don’t see color,” and that their children are “why racism shouldn’t exist.”

No. A pair of twins with different skin tones is not why racism shouldn’t exist. In fact, the fetishizm of biracial people and interracial relationships (and let’s be specific, biracial people where one of the races is white) as “proof” that racism will just die out is actually pretty racist! And that’s because it perpetuates the lie that racism is based solely on skin color.

Racism is certainly is based on skin color, but also on class and cultural perceptions, institutional white supremacy, and whiteness as a race one can “become.” It lets us off the hook, assuming that by 2050 everyone will have beautiful, brown-ish skin and “almond” eyes and all the other features we exoticize. “Look how nice we look, as a people, when white gets to be more interesting and minorities get to look white,” wrote Jia Tolentino about the phenomenon for the Hairpin. “Look at this freckled, green-eyed future. Look at how beautiful it is to see everything diluted that we used to hate.”

The last time a story like this came around was in 2015, with a pair of biracial twins from the U.K., and before that it was in 2012. And sure, it’s probably incredibly rare that this happens. But putting value in that rareness, as if it means anything more than a fact of genetics, does nothing to dismantle racism. We never follow these twins into the future and hear of them being treated differently for their skin colors, or question what race means when you have a black father and white skin. Nor do these stories open the conversation to the specific forms of racism and pressures biracial people face, like feeling not “enough” for either side of their family, or the constant “What are you?” questioning. Nor do they discuss how identity can be so malleable. We only hear of what a wild coincidence it is and get a feel-good story about how we’re all equal.

Meyer said that her older son reads to the twins every night. “People in this country could learn a lot from my son,” said Meyer. “He’s so innocent, he doesn’t understand racial tensions, because to him it doesn’t matter, as it shouldn’t matter to anyone else.”

The Illinois twins will no doubt be loved by their parents, their brother, the viewers and readers who see this story and understand skin color doesn’t tell the whole story. But to say racial tensions don’t matter is to discredit the millions of people who have been affected by those tensions, died because of them. Simply saying so certainly doesn’t help them go away.