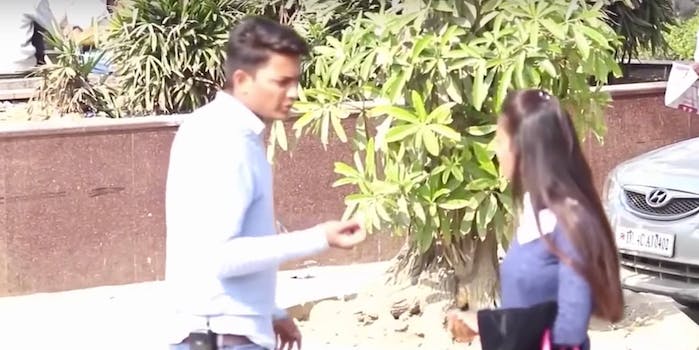 Sumit Verma's video is just the latest instance of assault being masked as humor.

A YouTube “prankster” is rightfully being called out for approaching women in Delhi, suddenly kissing them, and then running away. Because the real phrase for what he’s doing is not a “joke,” it’s sexual harassment.

Delhi police are now urging YouTuber Sumit Verma’s victims to file complaints, and he has apologized and deleted his video. Others are calling for his arrest, since kissing someone without their consent is a crime. But the language around his video highlights a deeper issue in how we talk about sexual assault.

In Verma’s apology, he calls his misdeed a “kissing prank gone horribly wrong,” and much of the news coverage around it echoes those words. He also says he made the video “for entertainment and had no intention of hurting anybody.” However, this was not a prank “gone wrong.” It went exactly as he planned. His intention was to run up to women, kiss them, and run away, and that’s what he did. The problem is it’s not an act of mischievousness or a practical joke, but a crime that’s played for laughs.

“Prank” culture online often veers into harassment. In another of Verma’s videos, he pulls strangers’ hair. Viral video maker Brad Holmes once rubbed his girlfriend’s tampon in hot chili oil under the guise of humor. In 2014, Big Brother contestant Sam Pepper filmed a “prank” in which he grabbed women’s behinds (and faced criminal charges for it). And last year model Gigi Hadid was grabbed and lifted up by Ukrainian media personality Vitalii Sediuk outside of a Milan fashion show. He calls himself a “prankster,” but his Wikipedia page lists his actions as assaults.

These are all instances of assault, but they are diminished by their instigators as pranks gone wrong, not realizing what they were doing, or “locker room banter.” And that’s because it’s in the assaulters’ best interest to not be seen as criminals. But the consequence is that the victims are often told to “relax,” that what happened to them wasn’t that bad, and that everything would be better if they’d just laugh it off.

It’s an understatement to say there’s nothing fun or funny about sexual assault, and just because some victims can and will laugh it off does not mean those who won’t should be criticized. But the next time one of these videos comes out (because unfortunately there will be a next time), we should all call it what it is.