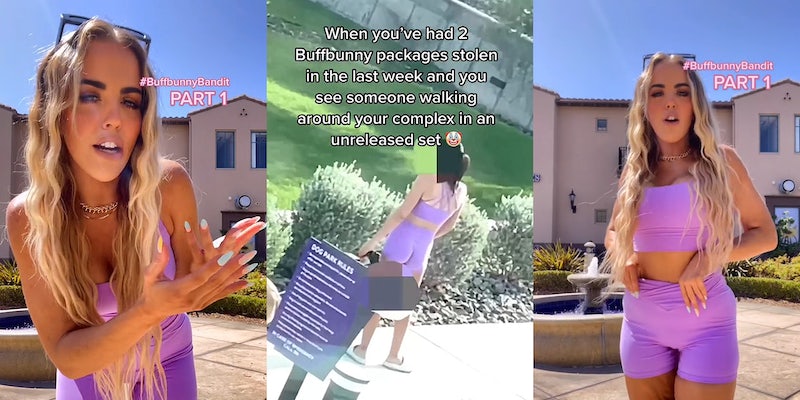 'I just feel like this is a pr stunt.'

A fitness influencer says that she saw a woman in her neighborhood wearing a workout set that was supposed to be delivered to her after the package containing the set was stolen.

Desiree Alexis-Kae Mize (@wokeuplikedez), who has over 660,000 followers, posted a TikTok on Aug. 15 showing a woman wearing a purple sports bra and biker short set, which Mize thinks the woman got from her packages from BuffBunny, a fitness apparel brand, that were stolen. Mize also says the set is “unreleased,” meaning the woman might not have been able to get it anywhere else besides Mize’s packages.

The TikToker posted another video of the woman walking around in the purple set, in which Mize says the woman “covered up” the BuffBunny logo when she saw Mize looking at her. In other TikToks, Mize says that she has had more than five packages not get delivered to her recently and that she suspects the woman in her TikTok took her packages.

Commenters on Mize’s videos offered suggestions about how she might be able to figure out what had been happening to her packages.

“Get a ring camera,” @annalacett commented. “If it’s been 4 weeks you should have already gotten a ring camera.”

“Leave a baited package with an apple air tag in it to find who takes it,” @tameikajadeee wrote.

But in an age of cleverly disguised advertisements on TikTok, others weren’t so sure they believed Mize and thought her TikTok’s were an ad for Buffbunny.

“I just feel like this is a pr stunt,” @akakakananajakkakak commented.

“I have a creeping suspicion that this is just a VERY clever ad for the brand,” @wtgrlrach94 wrote. “I’m not for sure, but it’s brilliant marketing if it is.”

The Daily Dot has reached out to representation for Mize via email and BuffBunny through a contact form.