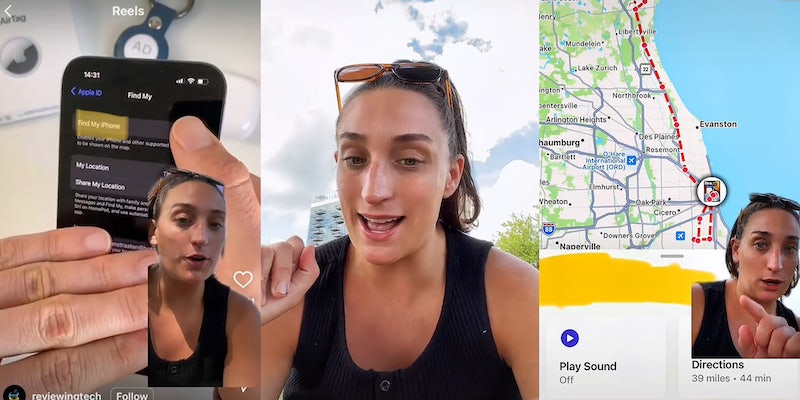 ‘When I called the police… and told them I knew the exact house it was in, they said take it as a loss’: TikToker’s theft recovery iPhone hack sparks debate

'The fact the police actually listened and went to the location has me skeptical.'

A TikToker’s viral theft-recovery iPhone hack sparked debate in the comments about whether knowing the location of a stolen device is helpful if there’s no way to retrieve it.

The creator, Katrina Audrey (@katrinaforeal), shared her own iPhone theft story and walked users through a step-by-step process of how to find your iPhone’s location, even if the device has been turned off. Her video has received over 11.5 million views.

“You need to do this iPhone hack in case your phone gets stolen because mine did last night, and I actually got it back,” Katrina says. She adds that she learned the hack from @reviewingtech on Instagram.

“First step go to Face ID and Passcode, you want to toggle off Control Center and USB Accessories,” Audrey explains. “Toggle on Location Services, Find my iPhone, and make sure to toggle on all three of these [she’s referring to Find my iPhone, Find my Network, and Send Last Location].”

This process requires the user to sign into any other iOS device with their apple ID and then remotely manage the settings of their stolen iPhone from the secondary device in order for this method to work.

Katrina continues, “This allows your phone, even when it’s off or on airplane mode to still be findable. Whoever stole my phone last night literally was out all night.” She then shows a screenshot of a map of Chicago that showed the trajectory of her phone’s path through a series of tracked steps.

“Look at what they went through in the city of Chicago,” she says. “South Side, North Side, they ended up going back to Gurney, Illinois. This is the address that they had it at, nice little place isn’t it?” The TikToker then showed an image of the home that was allegedly housing her stolen iPhone.

Katrina called the Gurney Police Department and gave them the address of the house. She says the police went to the home and retrieved her phone.

The FCC reports that 68% of phone theft victims are ultimately unable to recover their stolen devices. The agency wrote, “the reality is that whether your smartphone is white, black, or gold, it is now almost 30 times more valuable per ounce than a block of solid silver — and almost as easy to convert discreetly into cash.”

Despite Katrina’s tips, many TikTokers expressed that they’ve had difficulty recovering stolen phones and items from local police departments. The comments section was rife with criticism of the work authorities perform, or lack thereof rather, in obtaining these pilfered items.

“The fact the police actually listened and went to the location has me skeptical,” one user said. “Police straight up told me “and?” When I told them where my phone was.”

“That’s wild because when I called the police here in San Francisco and told them I knew the exact house it was in, they said take it as a loss,” another shared.

“That’s nice that the police department helped,” a third offered. When I tracked my husband’s iPhone the police made us get out of the neighborhood bc it was dangerous.”

One user said they took matters into their own hands, side-stepping any bureaucratic action. “This just happened with my phone a week ago,” they wrote. “But I didn’t call the cops, I just rolled up on the house.”

Some folks were left a bit confused by Katrina’s TikTok as she went through the step-by-step directions rather quickly. Commenters came to the rescue.

“Settings > Face ID and Passcode > Control Center & USB OFF, Privacy > Location services ON, then Apple ID > Find My > Find My iPhone TOGGLE ALL ON,” one user wrote.

“Use someone else’s phone and sign into your apple ID on the find my iphone app and then all your apple devices will be shown,” another noted.

The Daily Dot has reached out to Katrina on TikTok for further comment.