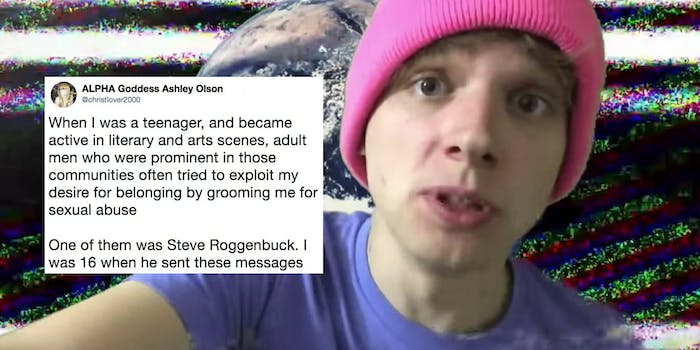 Others have come forward with allegations of abuse.

Steve Roggenbuck, a prolific poet in the alternative literature scene, has admitted to sending sexual messages to a woman who was underage when he was in his 20s.

The woman says following her public statement about Roggenbuck’s attempted sexual coercion and grooming, at least 20 other people told her they experienced similar behavior from Roggenbuck. Many of them say they were also underage at the time of these interactions with Roggenbuck.

On Oct. 2, Ashley Olson, 23, tweeted screenshots of a Facebook conversation between herself and a Facebook profile for Roggenbuck. Olson wrote that Roggenbuck exploited her “desire for belonging by grooming me for sexual abuse.” She said she was 16 and Roggenbuck was 24 when he sent her the messages. She told the Daily Dot that Roggenbuck knew her age and that she was in high school when he contacted and actively pursued her.

According to the screenshots, Roggenbuck wrote to Olson that he fantasizes “of a girl I can do anything I want with,” and asked her if she would “want to be a sex slave.” He also asked Olson if she fantasized about being urinated or defected on, and if she wanted to be tied to a bed with her mouth duct-taped shut.

“I will pull your head up so you can barely take a breath and then I will shove it back down and force you to suck more,” Roggenbuck wrote in one of the messages.

In additional messages, Roggenbuck expressed interest in traveling to see Olson. He encouraged her to not tell her parents about their meeting, writing that “your parents maybe wouldn’t have to know.. It’s just that you will have to be gone for a while.. Like hours haha.” Olson tweeted that these messages expressed “his intent to travel across state lines to meet me, [because] the age of consent was lower in my state than in his.”

“He stopped talking to me when he realized he couldn’t afford to travel to have sex with me,” Olson wrote. “For years I watched him gain popularity and status. I never forgot what happened.”

Here he expresses his intent to travel across state lines to meet me, bc the age of consent was lower in my state than in his. He told me to lie to my parents. As a kid in high school I didn't realize that he didn't care about me at all, outside of using me for sex. He was 24 pic.twitter.com/axyzV4PUAG

Olson’s first tweet of the thread detailing Roggenbuck’s behavior has nearly 2,000 likes, more than 700 retweets, and tens of responses, many from people expressing sympathy at Olson having experienced this when she was a teenager.

The same day Olson posted the messages, Roggenbuck shared a statement on his Twitter and Instagram pages with the caption “I’m sorry.” In the statement, Roggenbuck confirmed that he sent the messages to “a 16-year-old when I was in my 20s” but said that he “did not have a habit of talking to 16-year-olds this way.” He said that he made efforts to “change my behavior, apologize to people, and talk about related issues” after being confronted by previous parters about “other gross and shitty things” he had done, including making people feel “uncomfortable or obligated sexually.”

Roggenbuck, who has described himself as a feminist, wrote that his feminism was not “a stunt of a front meant to deceive people … It has been a sincere effort made by a flawed person.”

“I respect anyone’s decision to cut ties with me,” his statement said. “My intentions of my apologies cannot change the amount of harm done, and ultimately I think it’s right that I be exposed for. Again, I’m so sorry.”

Despite Roggenbuck’s assertion that talking to teenagers in a sexual manner was not a “habit,” Olson told the Daily Dot that after posting her screenshots on Tuesday, she was contacted by at least 20 other people who said they experienced similar behavior from Roggenbuck.

Olson said the people who contacted her described experiences spanning from receiving predatory messages, like those she shared, to being physically or emotionally abused by Roggenbuck. Multiple people who reached out to Olson said they were in their late teens, from “underage” through 19, at the time they were in contact with Roggenbuck, who was in his 20s. Beyond those descriptions, Olson did not want to speak on behalf of people who reached out to her.

Olson said for her, the messages Roggenbuck sent when she was 16 turned into years of trauma. She had considered going public with the messages for years but said she was afraid to say anything after seeing the negative reception of other victims after they came forward against Stephen Tully Dierks and Tao Lin, two of Roggenbuck’s colleagues, with stories of sexual misconduct in 2014. Olson said she felt that the people who came forward were exploited for sensationalism and experienced a massive backlash after publicly relaying their accounts.

Olson also said that “the fact that I felt like I still had to work with this man, who had access to power,” made her afraid to come forward.

According to Olson, she contacted Roggenbuck twice—in the summer of 2017 and again last month—and brought up concerns about the sexual messages he sent when she was a teenager. She said the first time they spoke, Roggenbuck blamed his actions on pornography; the second time, he insisted their relationship had been consensual and then blocked her.

Olson said she had anticipated that maybe two or three other people might have come forward with similar experiences involving Roggenbuck, but she finds it frightening that at least 20 others have spoken to her. As for Roggenbuck’s statement, Olson said that he hasn’t contacted her or any of the people who spoke to her to apologize for his behavior.

One of the people who reached out to Olson was a former partner of Roggenbuck’s. The former partner agreed to speak to the Daily Dot on the condition of anonymity. He was in a polyamorous relationship with Roggenbuck from late 2014 to late 2017 and was 21 at the time he and Roggenbuck, then 27, began dating.

While the former partner was a consenting adult when he and Roggenbuck began dating, he told the Daily Dot that their relationship was “characterized deeply by secrecy” on Roggenbuck’s end. He said he was subject to manipulation and sexual coercion by Roggenbuck, and that in 2016, Roggenbuck pressured him to be sexually available and maintain exclusivity after he told Roggenbuck he didn’t want to continue being in a polyamorous relationship.

“It has been so hard for me to talk about, because I was so deeply coerced, and groomed to be polite and non-confrontational towards him, I never felt my accounts could hold up on their own,” Roggenbuck’s former partner told the Daily Dot. “I am a survivor of sexual assault, and was before I began my relationship with Steve. It’s just really deeply disturbing to me, and I am unpacking and working through the deep sense of loss that I experienced during our relationship, the loss of my agency over myself and the time that I was molded to be absolutely his, and not of my own.”

Roggenbuck’s former partner, who is a transgender man, also said that Roggenbuck objectified his transness and attempted to prevent his transition while they were together, urging him to reconsider going on hormones because Roggenbuck would no longer be attracted to him. Roggenbuck also continued to “deadname” him, aka use his previous name, even a year after he had changed his name, and asked if he “had” to call the former partner by his chosen name.

After speaking to another person who said they had been abused by Roggenbuck, the former partner said he concluded that Roggenbuck had exhibited a pattern of abusive behavior in their relationship.

Olson told the Daily Dot that she wants people to understand that abuse is normalized and isn’t specific to Roggenbuck. She wants others to understand that there are people beyond Roggenbuck who abuse their influence to foster predatory relationships, but that behavior like his isn’t acceptable and shouldn’t be considered normal.

Still, Olson said, “[Roggenbuck] only used his platform to prey upon teen girls and vulnerable people, so it’s ethical to remove him from his platform.”

Roggenbuck did not respond to the Daily Dot’s request for comment.