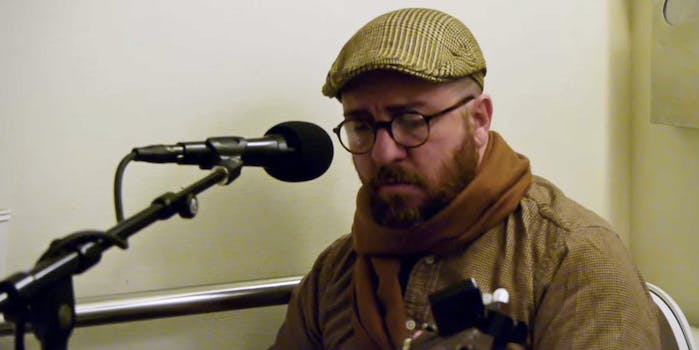 Stephin Merritt is the biggest troll in the online literary scene

The Magnetic Fields frontman isn't one for sparing feelings.

Stephin Merritt, a musician best known as the creative force behind deadpan indie-pop band the Magnetic Fields, has entered the arena of literary criticism—and readers are up in arms.

oh haha stephin merritt is being dumb and gross again?

At issue is Merritt’s typically petulant reading of the acclaimed novels An Untamed State and All the Light We Cannot See for a judgment in the semifinal round of the 2015 Tournament of Books, a bit of literary bracketology organized by the Morning News.

The annual contest, though small, has dedicated fans, and often invites ferocious microdramas. An author of one of 2014’s underdog books, for example, trolled readers by trying to withdraw from the contest. (Disclosure: Your humble correspondent lost in an opening round in 2013. To Gone Girl.)

Merritt found nothing of value in either contender and had especially harsh words for An Untamed State, which he called “craven” and “tedious,” lamenting its sustained interest in the kidnapping, torture, and rape of its “jerk” protagonist. Author Roxane Gay, beloved on the Web for her essay collection Bad Feminist, benevolent public persona, and editorial collaborations with the Toast, didn’t seem too ruffled by such comments.

Her fans, of course, were another matter. “[T]his is the first judgment in years that has made me want to punch someone,” wrote one commenter. Another argued that “every musician invited to participate in this tournament has delivered a shallow, poorly argued judgment that has demonstrated, at best, lack of reading comprehension, and at worst, a distaste for reading in general.”

Things got so heated that Morning News staff had to moderate.

Over on Twitter, reactions were divided. Some people were disgusted, and some cried “troll.” Reference was made to Dale Peck, a writer and critic infamous for his mean-spirited hatchet jobs.

Today I found out that Stephin Merritt is Dale Peck's ghostwriter.

I would never call Stephin Merritt. I interviewed him once and it was so uncomfortable that I wanted to cry under my desk afterward.

Possibly Merritt should not be allowed in public without Claudia Gonson's moderating influence. #TOB

noted comedian and prank-show host stephin merritt would like you all to lighten up!!!

@Senneteer Yes. And Roxane Gay is beloved for her public persona/what she stands for, so people feel like it's an attack on ALL that.

It's funny that Merritt made the remark about audience since he seems clueless as to the audience of what he wrote about the books.

feeling controversial: i didn't like 'an untamed state' but merritt still failed to remotely engage with it, which is also known as reading

The Troll Of The Day™ is Stephin Merritt.

Stephin Merritt also ordered a sandwich from me once at my old job. He told me he didn't like it.

Although Merritt was a frequent and primary target, the Tournament of Books itself came in for some blistering critique.

The #ToB makes me question my wanting to ever have a book published. This simply doesn’t seem constructive.

TIL there's something called the tournament of books! I hope by 5 PM I'll have forgotten all about it.

Those who bemoan the “epidemic of niceness in online book culture” ought to be happy, at least. But don’t go so hard on Merritt for that review: It was likely penned by his evil twin.