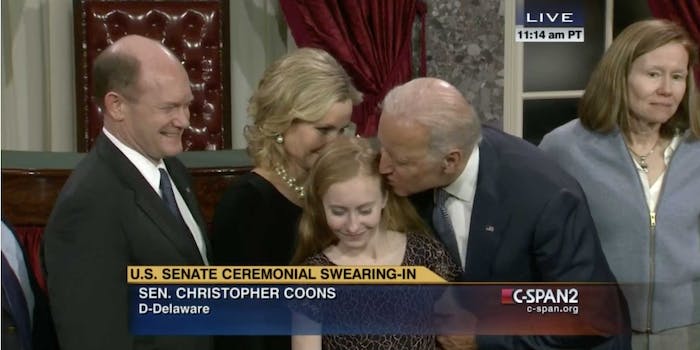 Stephanie Carter does not speak for Lucy Flores or anyone else.

We get it: Joe Biden is the fun uncle who cracks goofy jokes and may be just a bit handsy and out of line from time to time. But it’s all in good fun, the media narrative has told us for years.

However, now that a female peer has spoken out against Biden’s behavior as he considers a 2020 presidential bid, the former vice president’s creepy uncle shtick is under scrutiny. And it’s time we discuss why we’ve excused it for so long.

On Friday, former Nevada Assemblywoman Lucy Flores wrote about an interaction she had with Biden in 2014, when she was a Democratic nominee for lieutenant governor.

“I felt him get closer to me from behind. He leaned further in and inhaled my hair. I was mortified,” she wrote. “He proceeded to plant a big slow kiss on the back of my head. My brain couldn’t process what was happening. I was embarrassed. I was shocked. I was confused. There is a Spanish saying, ‘tragame tierra,’ it means, ‘earth, swallow me whole.’ I couldn’t move and I couldn’t say anything. I wanted nothing more than to get Biden away from me.”

On Sunday, Carter issued her own statement on Medium, claiming she was not uncomfortable with Biden’s gesture and he was merely supporting a friend. “The Joe Biden in my picture is a close friend helping someone get through a big day, for which I will always be grateful,” she wrote of the 2015 incident when her husband was being sworn in.

Carter acknowledged Flores’ experience as real but dismissed claims that her own experience with Biden was inappropriate.

“Let me state upfront that I don’t know her, but I absolutely support her right to speak her truth and she should be, like all women, believed,” she wrote, acknowledging Flores’ experience. “But her story is not mine.”

This is an extremely valid point, one that needs to be considered in reverse: Even though Carter’s experience of Biden could genuinely be that of a friend being supportive, it doesn’t negate the experiences of other women, including documented instances that show Biden creepily kissing or whispering to women and young girls who look visibly uncomfortable. If anything, it’s a testament to the fact that every woman has a different sense of boundaries (often negotiated based on what society has told them to put up with), and feeling violated is something only the violated can define for themselves. It is not up to the violator, or his friend or the general public, to tell a survivor how to feel.

While Biden’s behavior might not fall into the clear category as sexual assault for Flores, she termed it rather an “invasion of personal privacy.”

“I think it’s an important conversation to have because… we are in a culture shift,” she said on MSNBC on Monday morning in response to Carter’s claims. “That’s exactly why I decided to speak out because this type of behavior, while it doesn’t rise to the level of sexual assault, it doesn’t rise to the severity in which we are oftentimes hearing about various violations to your body, we don’t take oftentimes this lower level of invasion of space and unwanted touchings of your body in the exact same kind of seriousness in which we do the other type of behaviors.”

In response to Carter’s comments, she said, “That is not in conflict at all with anything that I wrote about or anything that I have said,” adding that Carter had a personal relationship with Biden that would’ve changed the power dynamics in the situation.

At the core of it, she says, is the context of power relations—of men in power positions feeling entitled to women’s space and bodies.

“For me, in this situation, it was unwanted, it was shocking, because of the power difference,” she said. “Context is also important here… and understanding that there’s a very, very powerful man—he was the second most powerful man in the United States at the time—and I was a candidate and I was not expecting him to touch me in that kind of an intimate way and to kiss me. Regardless of what his motivation was, there was no personal relationship there, there was nothing that any person would consider normal in that interaction, and so yes, it made me feel like I couldn’t do anything to stop it.”

Flores touches on a key nuance in the #MeToo movement that often gets missed about the “choice” women have in speaking up against predators in certain situations—and the pressure they feel to keep quiet. Many of the women Biden is seen weirdly kissing or whispering to are women he knows in a professional capacity, and it can be daunting to challenge one of the most important politicians in America, especially while in office, for kissing you in front of a camera—a bold, powerful move in and of itself.

“This is a conversation that’s necessary because it’s about a power imbalance,” she added. “Men who are powerful and feel that they’re entitled to women’s spaces, and for many years no one talked about that in a serious way.”

On Sunday, Biden responded to Flores’ account and said he is listening.

Statement from @JoeBiden this morning. pic.twitter.com/EbCchX2npU

However, on Monday, Biden’s spokesman took a more defensive approach, saying the some of the clips circulating of Biden acting inappropriately have been photoshopped. Not addressed in this claim is probably the hardest-to-watch clip of all.

If Biden is truly “listening,” he can do better. He can own that he made Flores uncomfortable and apologize. (Flores says Biden has yet to reach her to personally.) He can recognize that Flores and Carter’s individual accounts are very different, and that a woman’s experience with a powerful man can vary based on their relationship and their dynamics. Just because a shoulder touch was a friendly gesture for one woman, doesn’t erase another woman’s experiences with the same man touching her body.