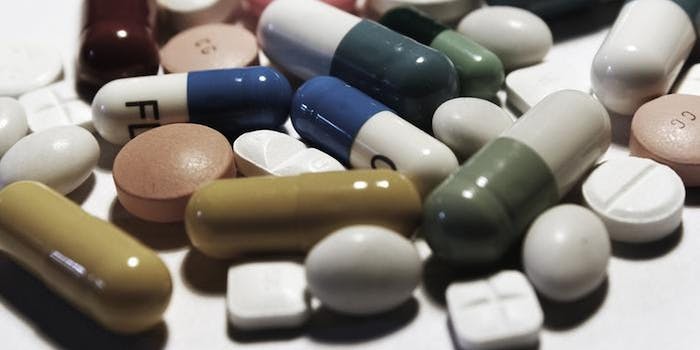 Ladies, stay away from male enhancement supplements—especially with a name like Donkey.

At this point, I should make one thing clear: I did not take this pill for its intended use. Although it’s not unheard of for biological women to take pills like Viagra to increase their sex drive, I did not try Donkey to enhance my sexual performance. I took it for an even dumber reason, the kind that’s most often cited by preteens who mix Pop Rocks with Coke or stick their tongues on frozen ice poles: basically, to see what would happen.

I was also not under its influence while doing my job. I was in the waiting room at the McCarran International Airport in Las Vegas, where I’d just spent three nights attending the Adult Entertainment Expo (AEE), an annual porn-industry expo. I’d arrived at the airport early to file a story with a music critic named Kevin (name has been changed), whom I met at the Expo. My colleague Greg Seals and I had bonded with Kevin a few days earlier, when he took us to Señor Frog’s to get loaded with two venture-capitalist porn-tube-site bros, one of whom had performed a fairly impressive freestyle rap about Pokémon in the cab.

Like me, Kevin had come to the airport early to transcribe interviews and write his story. But after three days and nights of writing, reporting, and trying to stay awake with the cast of a new reality show called The Sex Factor, I was having trouble keeping my eyes open.

That’s when Kevin handed me the Donkey packet. “Here,” he said. “Take this dick pill.”

It was still making its way down my esophagus when I thought, “Wow, this might be the dumbest thing I’ve ever done.”

“Where did you get this?” I asked.

“From one of the tables at the Expo,” he said.

“It didn’t make me hard, if that’s what you’re asking,” he said. “Mostly, it just makes you feel like you’ve taken Adderall.”

I looked at Kevin. We had known each other for three days, or about a decade in AVN years. We had been to Señor Frog’s and a strip club together, so in Vegas sex industry terms, we’d basically come up hand-in-hand through the military. I was confident my comrade wouldn’t knowingly give me something that would make me seriously ill.

So I took the pill. It was still making its way down my esophagus when I thought, “Wow, this might be the dumbest thing I’ve ever done.”

Take a minute here and visit Donkey’s website, donkeymale.com. “Donkey Male Enhancement is a 100% Natural Premium Blend of the highest quality extracts that increases Sex Drive and Stamina and helps elevate testosterone levels,” it reads. Then, at the very bottom: “These statements have not been evaluated by the Food and Drug Administration. These products are not intended to diagnose, treat, cure or prevent any disease.”

I wish I had looked a little more closely at the label, too. 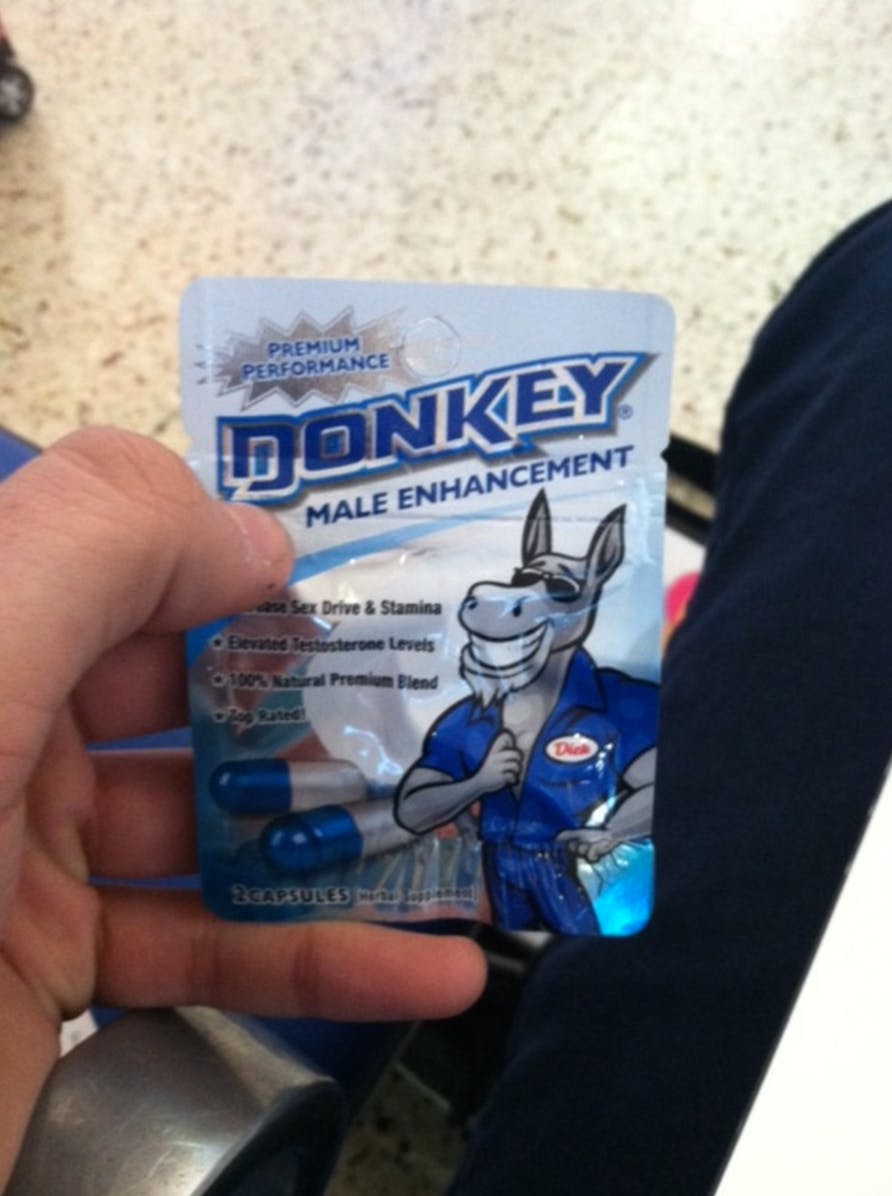 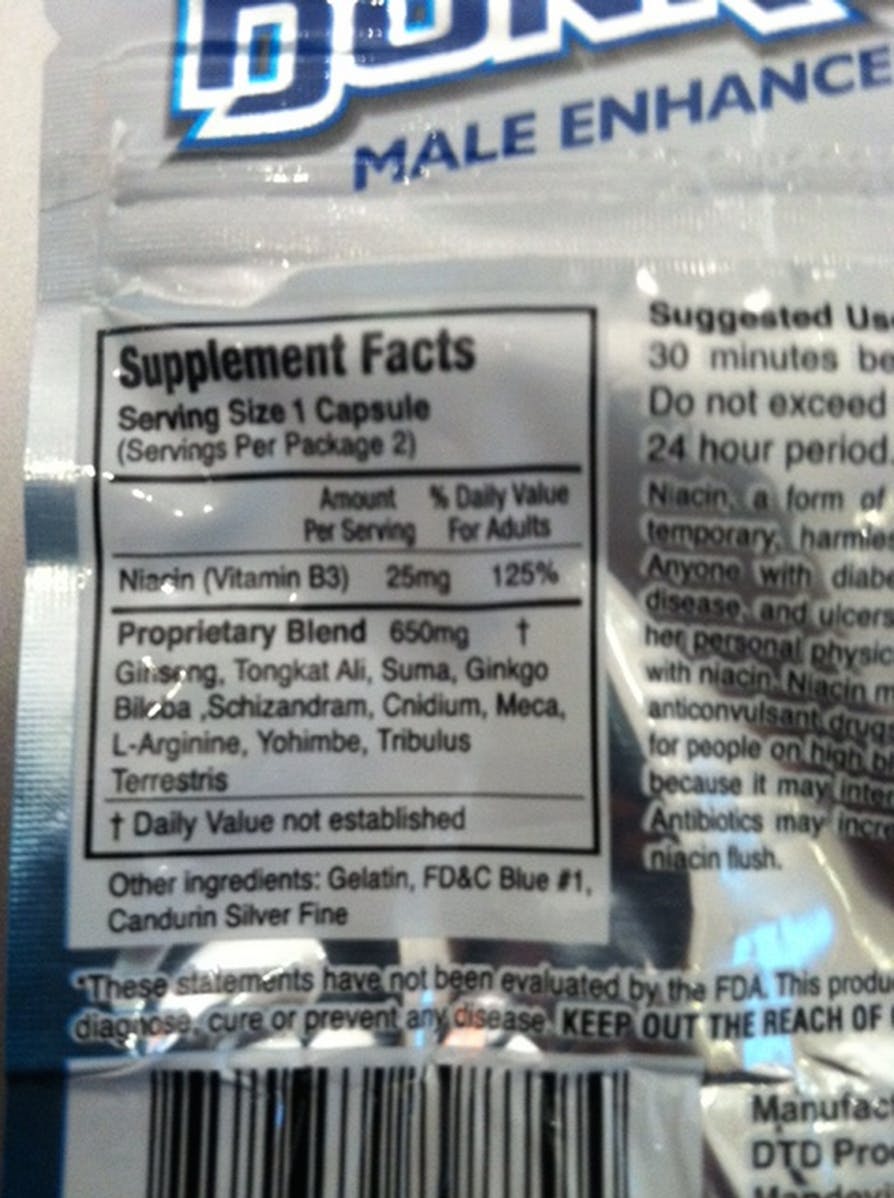 About 30 minutes after swallowing, I was seized with what I can only describe as the most powerful hot flashes I’ve ever experienced, which was immediately followed by a surge of nausea. Given that all I’d consumed in the past 48 hours was half a Denny’s cheeseburger and a few $18 strip club Budweisers, it shouldn’t have been all that surprising that I’d feel sick.

(Kevin, for what it’s worth, felt fine.)

But the thing is, I’m emetophobic, which means I don’t get nauseous or throw up, ever. My aversion to vomiting is such that I would rather cut open my veins and bleed out the offending food item than put my head inside a toilet. Consequentially, I have a no-vomiting streak of about nine and a half years. But as I sat outside the Starbucks at the McCarran International Airport, it felt like this streak was about to come to an end.

Immediately, I repaired to the women’s restroom and spent what felt like hours curled up on the floor, shaking and shivering and sweating bullets, trying to empty out the little that was in my stomach, to no avail. When I came out, wobble-kneed and shivering, Kevin presented me with a banana and a bottled water, but I demurred, curling myself up into a fetal position so sleep—or, even better, death—would save me. It was no use. Minutes later, my body started convulsing in dry heaves, and I careened back to the bathroom.

“This is common,” the paramedic said. “This literally happens to everyone who comes to Vegas.”

After an hour or so of praying to the McCarran International Airport porcelain gods, two things were clear: I wasn’t going to throw up, and I wasn’t going to feel better anytime soon. I also wanted to get away from Kevin, because I consider it a good rule of thumb not to puke or shit on new friends, especially reporters.

So I left my bags with Kevin—who, at this point, was starting to feel pretty bad for giving me the pill in the first place—and ran around the airport, asking various baffled attendants where the First Aid was. I had also come down with chills, and my body was violently convulsing into paroxysms. People probably thought I was a heroin addict in withdrawal, which, frankly, would’ve been a lot more badass than the truth.

Eventually, a kindly airport attendant saw that I was sick and sat with me while we waited for the airport paramedics to arrive. They strapped me down onto a gurney, stuck an IV in my veins, and took me to a hospital about 15 miles away from the airport.

“Did you take something, sweetie?” one of them asked me.

“Dick pill,” I said thickly. I was feeling so awful I could barely talk, let alone feel self-conscious about telling them what I’d ingested a few hours before. They looked at each other briefly, then asked me when my last menstrual period was. I thought they hadn’t heard me, so I brought it up again.

“Am I going to die from taking a dick pill?” I asked.

“No,” one of them said. “It’s probably not the pill. You’re pretty severely dehydrated. You haven’t been sleeping, haven’t been eating. You’ve been drinking a lot. We’re going to pump some fluids in you and you’ll probably feel 100 percent better when we get there.”

“This is common,” the other paramedic said. “This literally happens to everyone who comes to Vegas.”

In a way, I was relieved. These people were professionals. They didn’t think I was a dick-pill-chugging sex pervert. They just thought I was a typical Vegas club-bunny trashbucket, with skunk-dyed hair and a Monroe piercing and a tattoo of Avicii on my ass, and I’d simply taken too much E and partied too hard.

As it turned out, the paramedics were right: Thanks to the fluids, I felt better by the time I reached the hospital. In fact, I felt well enough to show the attending doctor the Donkey label photos that Kevin had texted me en route to the hospital. The doctor looked at the label, then looked at me. “Why the heck would you take an over-the-counter erectile dysfunction pill?” he asked.

After a few blood tests and an hour on the IV, the doctor came back to tell me the paramedics had been right: I was severely dehydrated, as a result of the arid conditions of the Vegas desert and my not having taken adequate care of myself at the conference. When I asked about the dick pill, he said it was likely that I’d reacted badly to one of the ingredients: niacin, which causes feelings of extreme warmth and facial flush. (I confirmed this firsthand when I looked in the mirror: It looked like I had just received a chemical peel from an overly enthusiastic student aesthetician.) The caffeine in the dick pill had also probably contributed to my dizziness and shakiness. After giving me a fact sheet about niacin and more than a few bizarre looks, they discharged me.

When I got out, there was good news and bad news: I’d gotten out of the hospital in time for my flight, but I was still nauseated, and I didn’t feel ready to spend eight hours on a red-eye flight, sitting between mouth-breathing gamblers and hungover exotic dancers. Fortunately, I have family in Vegas, who very generously picked me up from the hospital and brought me back to their house to nurse me back to health. While I initially felt terrible about being a burden on them, I had to admit it felt good to be taken care of, especially when I had done such a terrible job taking care of myself.

There are two kinds of people in this world. The first type will, when offered a shot, snort, or smoke, consistently refuse to take it, regardless of what it is or who’s offering it. The second will do the complete opposite.

At various points in my life, I have fallen into both of these categories. Following an ill-advised period in college where I ingested hallucinogenics as often as most people change their underwear, I’ve since settled into a life of near-abstinence and refuse most substances offered to me.

So when I got on the phone with my boyfriend afterward, he was dumbfounded at how I could’ve been stupid enough to take the dick pill. (He was also furious at Kevin, although I explained he’d taken it with no ill effect and had been extremely contrite about giving it to me in the first place.) “Still, I guess you can chalk it up to a learning experience,” my boyfriend said. “Though why you needed to learn not to take a boner pill a journalist gives you at an airport, I don’t know.”

Apparently, I did need to learn not to take a boner pill a reporter gives you at an airport. But I also learned a few other things:

Also, I look pretty badass in a neon-orange hospital bracelet.

I went to Vegas and all I got was a Jasmin tee and a hospital bracelet pic.twitter.com/w49sCMLyOP