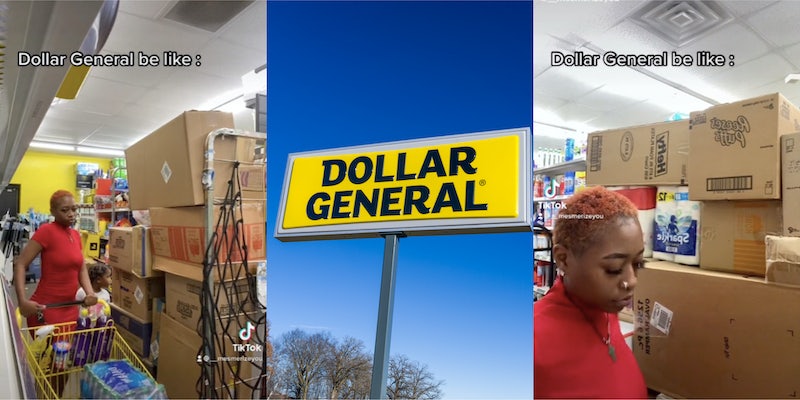 'It’s because it’ll be the one worker that basically does everything in the store.'

Dollar General has come under fire numerous times in the past year for the state of its stores.

Earlier in the month, an employee went viral after pleading with management for help with his store, which was overflowing with stock. In May, another Dollar General story made waves across the internet after a user filmed a location that seemed to only have one employee in charge of the entire store.

Now, another Dollar General video on the same topic has rekindled discussion about the chain.

In a video with over 268,000 views, TikTok user Alexis (@__mesmerizeyou) documents her attempts to make her way through the aisles of the store. Many are too full to navigate.

In the comments section, many users noted that they had experienced something similar at their own Dollar General locations.

“And here I’m thinking it’s only in my neighborhood,” stated another.

“So that’s just the company standard and not just poor management,” shared a third.

“Reasons why I don’t go,” offered a fourth. “Like why y’all got the whole inventory out.”

Other commenters offered reasons as to why Dollar General stores look the way they do.

“As someone who’s worked at 2 of them – it’s not always an issue of lack of employees, it’s a lack of hours that the manager is able to give employees,” claimed a commenter.

“From experience it’s because it’ll be the one worker that basically does everything in the store and cashier at the same time,” alleged a second.

“I work at [Family Dollar] and it be like this. They bring too much stuff that it can’t fit on shelves so they leave it there,” said a further TikToker.

While the stores may be chaotic, it does not appear to be affecting the company’s bottom line.

The Daily Dot reached out to Dollar General via email and Alexis via Instagram direct message.