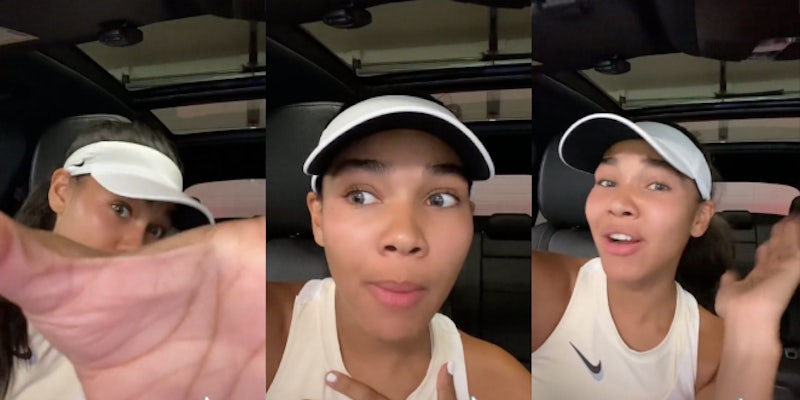 ‘He left his mic on’: Customer says she caught Starbucks worker talking sh*t about her order in drive-thru

'As a former barista—this is an EASY drink. And the way you were treated was so out of line.'

A TikToker claims that she heard a Starbucks employee on a hot mic making jokes about her order.

The video, posted by popular user April Buckles (@aprilmbuckles), already has over 833,000 views and more than 1,400 comments.

In the video, April, who is sitting in her car, starts by asking her 400,000 followers whether “[she’s] the drama” and proceeds to tell the story of her “really bad encounter” at Starbucks.

@aprilmbuckles No bc fr fr shame on you. I have never asked to speak to someone’s MANAGER! Now I gotta sit here and email your boss 😩 #starbucks #fyp @Starbucks #customerserviceproblems #customerservice ♬ original sound – April Buckles

I know that “my order is complicated,” April admits. She adds, though, that she’s been a loyal Starbucks customer for over a decade and always orders the same thing: a trenta iced green tea with 14 packs of agave.

“I used to cut up the agave and put it in there myself before COVID came, … because I feel bad,” she says. “I know the service industry is hard.”

Since the pandemic began, however, she says that employees insisted on doing the work themselves—seemingly to avoid the passing of germs. But after April recited her order to this particular drive-thru employee, she says, he appeared “exasperated.”

“He left his mic on and was like, ‘Yeah, have fun making that,’” April says she overheard.

April adds that the cashier was also curt and “slammed the door shut” in between taking her money, handing her the beverage, and finishing the transaction. Then she says she noticed the drink was made wrong and asked the cashier whether there was any agave at the bottom of the shaker, which she says he denied without looking inside the shaker. She says she proceeded to ask whether she could have a straw to see if the agave was stuck to the bottom of her cup and says that the employee “[snatched] a straw and [gave] it to me without saying anything.”

“I tell him, ‘I think the order is wrong because it doesn’t taste like anything is in it,’” she says. “He’s like, “Well, I can try to remake it. What do you want me to do?”

Since the store closed soon, April didn’t ask him to remake her order. But the employee was seemingly fed up because “he then proceeded to slam the door so hard that it [vibrated.]” He also stormed off, she says, “swinging his hands in the air and saying a bunch of stuff.”

April concludes the video by saying she asked for a manager. “I’ve never done that before,” she says.

Several commenters were curious to know what the manager did; others said that the employee’s actions were out of line.

“As a former barista, this is an EASY drink. And the way you were treated was so out of line and uncalled for. I’m sorry this happened,” reads one comment with over 3,000 likes.

“BABE THAT’S NOT COMPLICATED I PROMISE,” another user wrote.

The Daily Dot has reached out to April via TikTok and Starbucks via email.