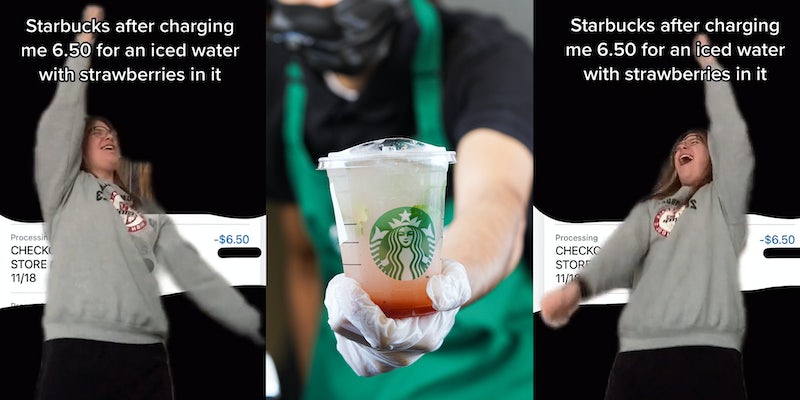 ‘It’s corporate… we have to charge I’m sorry’: Starbucks customer says he was charged $6.50 for water with strawberries

'I'm still upset about this.'

In a viral TikTok, a customer claims his local Starbucks location charged him $6.50 for ice water with strawberries, sparking discussion about the chain’s pricing.

The video features user Sean Barry (@seantbh) as he films himself in front of a green screen. The screen behind him shows a notification from his bank, noting that $6.50 was taken out of his account.

“Starbucks after charging me 6.50 for an iced water with strawberries in it,” Barry wrote in the text overlay.  In the background, a viral sound repeats “happy,” while Barry dances.

The TikToker vented his frustration in the caption, writing, “Im still upset about this.”

The video has garnered over 65,000 views since it was posted Nov. 22, with several alleged current and former Starbucks employees explaining the charge.

“We have to ring it up as a custom tea with strawberry inclusions,” one viewer explained.

“They force us to ring it as a custom tea latte not our fault,” a second wrote.

“I work at Starbucks and we have to charge it has a custom tea for the labor it takes to make it….which is really stupid I’m so sorry,” a third echoed.

“Im pretty sure it’s due to it being considered ‘extra labor’ because that’s not a recipe drink,” a fourth added.

Others shared their own unsatisfactory customer experiences.

“Dude I’ll get a coffee and on the menue it will be 4 but then they ring u in and it’s like 6 bucks I’m like HOW,” one person said.

“Reminds me of when I worked at Crumbl and they wanted us to charge ppl $ for extra boxes,” a second stated.

“When they charged me 5.50 for a latte and forgot the shot of espresso so essentially gave me steamed milk,” a third commented.

Barry provided more background on the incident in the comments, writing, “For more context online it said a water with strawberries was 66 cents and I honestly still am not sure why I decided to tap my card for 6.50!!!”

The Daily Dot reached out to Barry via TikTok comment and Starbucks via press email.