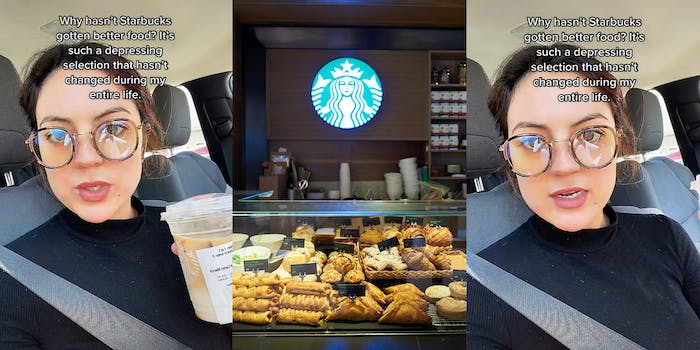 Some customers believe the food at Starbucks is bland so as not to overpower the coffee smell.

In a viral video, TikToker Your Modern Lawyer (@yourmodernlawyer) asks her followers if anyone else believes Starbucks should revamp its menu. The video, which was posted on June 8, now has over 109,000 views

“Does anyone else agree that Starbucks needs better food and that they’re missing out on a ton of profit if they would just improve their weird microwaved wrap selection and the same parfait they’ve had since 2009?” she says. “Like why haven’t they improved it?”

“Agreed? Or do you like a weird egg bite and a mediocre parfait?” she added in the caption.

Starbucks rarely updates its menus unless it’s in a move to keep a fan favorite. In 2021, Starbucks decided to keep the winter food favorite of kale and portobello mushroom sous vide egg bites as a permanent fixture on the menu. This year, Starbucks will add the bacon, sausage and egg wrap, new chicken, maple butter and egg sandwich, and the cookies and cream cake pop for the summer season and beyond.

@yourmodernlawyer Agreed? Or do you like a weird egg bite and a mediocre parfait? #starbucks #starbucksfood #why ♬ original sound – Your Modern Lawyer

Viewers debate Starbucks’ high prices, employee responsibility, and what could’ve been in the video’s comments section.

“Literally worse than airport convenience store food PLEASE I WOULD BUY SO MUCH OF IT,” one user said.

“The workers’ lives would be soo much harder is the only prob like serving sm food in drive-thru is drama,” another user commented.

“They had SUCH good options before they bought la boulange! Went downhill after that. Still missing the chocolate chip banana bread 10+ years later!” a third wrote.

In 2012, Starbucks bought La Boulange Bakeries for $100 million but closed the bakery three years later. However, even though the bakery was closed, the coffee chain had acquired the recipes for future use.

The Daily Dot reached out to the TikToker via TikTok comment and email and Starbucks via email.