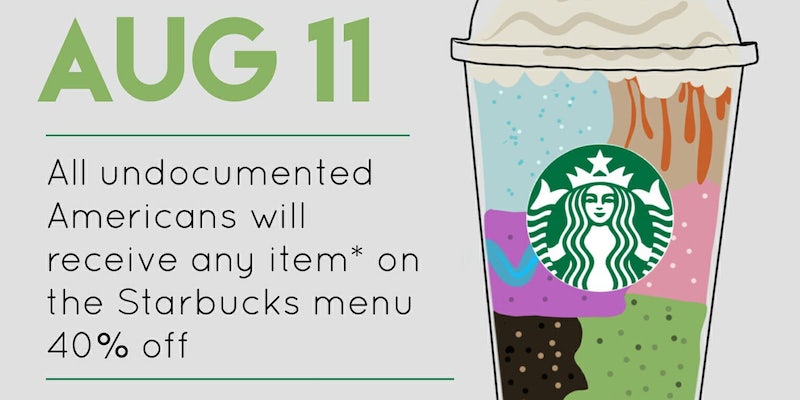 You might have seen it: A “Dreamer Day” ad that states “all undocumented Americans will receive any item on the Starbucks menu 40% off” on Aug. 11. Except there’s a problem: There’s no such thing as “Dreamer Day” at the coffee chain.

The idea is a hoax, spread on the internet in an attempt to trick undocumented Americans into outing their citizenship status at their local Starbucks.

BuzzFeed News reveals that the idea came from 4chan, after posters on the board /pol/ kicked around an “Undocumented Immigrant Day” for Starbucks. According to an archived thread, the plan was to “name a liberal place for all illegals to go at once and demand free stuff.” Another poster suggested calling ICE, essentially deporting immigrants so it would “cripple their business a bit.”

“We have to get ICE involved if we get it rolling,” another poster wrote. “Where else do these faggot liberals hang out?”

Posters agreed on the name “Dreamer Day,” saying that liberals “love that term” in reference to undocumented immigrants. Fake ads were later allegedly created on 4chan, and the idea was billed “Operating #borderfreecoffee day” on /pol/. Users wrote how they planned to share the ads, creating a hashtag to propagate the hoax.

“The plan is to meme into existence a day where Starbucks is supposed to give free coffee to ‘undocumented Americans’ and then alert ICE for the round up,” the thread’s original poster states. “Even if this doesn’t work it will still be a good publicity scare.”

Over on Twitter, users attempted to spread the hoax, insisting that Aug. 11 was officially “Dreamer Day” at Starbucks.

This is completely false. Starbucks is not sponsoring any such event. Please do not spread misinformation.

Twitter users have since warned others about the hoax, revealing that 4chan originally created the campaign. Some have even used the #borderfreecoffee hashtag against /pol/.

Told my partner about the fake #borderfreecoffee and her response was "do white people think we're that dumb?".

Great way for @FBI & @TwitterSupport to backtrack these fools too

This certainly isn’t the first time that Starbucks has been the target of the alt-right. Trump fans previously boycotted a local Starbucks by purchasing Starbucks coffee. And after Starbucks’ former CEO Howard Schultz announced that the company was planning to hire 10,000 refugees, Trump fans geared up for a boycott protest under the #BoycottStarbucks hashtag as well.