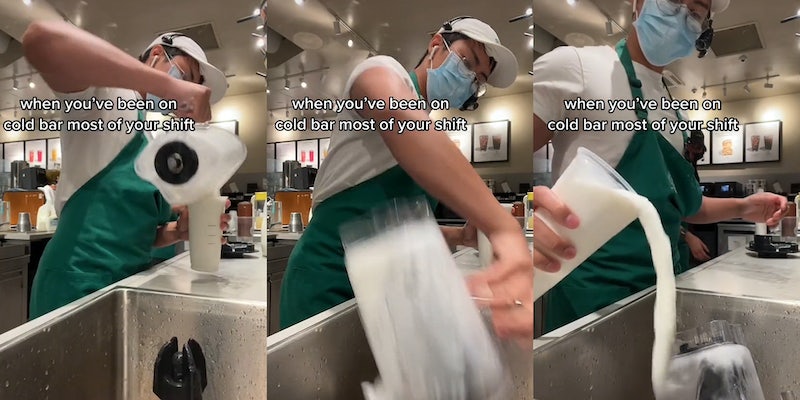 ‘The absolute hatred in my heart whenever someone orders a cold drink’: Starbucks barista complains about working the ‘cold bar’ for most of his shift

'Thank you for your service. sincerely, someone who loves cold blended drinks from Starbucks.'

In a viral video, a Starbucks barista shared that they hate working the “cold bar” for most of their shift at the coffee store chain.

The barista, known as Whiffy (@whiffy__) on TikTok, posted a video of themself working cold bar and not having a good time. Cold bar is where all the iced beverages at Starbucks are made. In the video, Whiffy is seen slamming a blender into a sink and roughly pouring off some of the drink he had made.

“When you’ve been on cold bar most of your shift,” the video’s on-screen text says. As of Saturday, the video reached about 1.2 million views.

Based on the comments on the video, the cold bar is a hated assignment among Starbucks baristas.

“I HATE cold bar soo much. unless there is a second person there with me,” one viewer commented. In reply, Whiffy wrote, “we never have more than five ppl working at one time, so solo cold bar all day.”

“I only like cold bar when it’s slow then I feel like a lil magician making potions and decorating stuff,” a second viewer commented.

“Me today cus I was on cold bar my whole shift [and] it was half off iced drinks,” a third said.

One viewer, who appeared to be a Starbucks customer, wrote, “thank you for your service. sincerely, someone who loves cold blended drinks from Starbucks.”

However, cold bar isn’t all bad for some Starbucks employees.

“Unpopular opinion but I’d rather have cold bar than hot bar any day I LOATHE hot bar,” one user said.

“I used to love doing cold bar because my back is turned on I don’t have to talk to customers lol,” another user said.