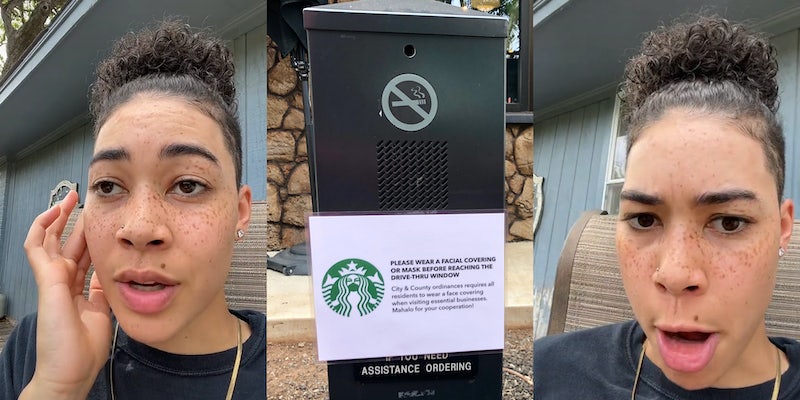 ‘You can’t argue with a robot’: Starbucks barista used ‘automated’ voice to get customers to leave drive-thru after their store closed early

'When I worked at Starbucks, I loved using my robot voice.'

A Starbucks Barista went viral for sharing their “genius” method of getting drive-thru customers to leave their store after it was forced to close unexpectedly due to a plumbing issue.

In the video, Drey, who posts under the username @itsdreymf, says they had to resort to pretending to be a robot in order to discourage customers from loitering in the drive-thru lane and arguing with employees over the fact that their location was closed.

“Just another day in paradise :),” Drey captioned the video.

There have been a few instances of Starbucks customers waiting in the drive-thru and attempting to get their coffee fix despite the store being closed or out of order. During one incident that occurred a few months ago, a hopeful customer wouldn’t leave, despite a sign indicating that the location was indeed closed for the night.

However, with no sign to note that they had closed early, Drey had a different solution for stubborn customers.

“So my Starbucks location had to close early today due to some plumbing issues and you know we’re telling people that as they’re coming through the drive-thru,” Drey says in the TikTok. “We already had a line in the drive-thru, but we have to tell people as they’re coming still, cause we don’t have a sign or anything. We’re like, ‘Hey sorry y’all, we’re closed today, actually, we just closed.'”

They continue, “And of course, you know, ‘Oh my Gosh, what?'” The TikToker launches into an impersonation of an irate customer, “‘What do you mean you’re closed? I don’t understand? Why?’ You know, responses of that nature.”

Drey notes that they got tired of having to explain the situation and deal with customer’s reactions.

“Next person that comes through the drive-thru try to sound as automated as possible. OK?” they say, recalling their thought process.

“‘Sorry. Our location is now closed,'” Drey says in a tone mimicking an automated message. “And they roll right through. I was like…wait a minute this shit works, let’s try it again.”

The barista says they once again spoke in an ‘automated’ voice, and the customer left without issue.

“No rebuttals, no nothing, you know why? Cause you can’t argue with a robot,” Drey says. They then tap the side of their head, saying, “Big brain.”

Viewers were impressed by the barista’s ability to seamlessly transition voices.

“How tf do you have so many voices,” one user wrote.

“You might have a future in voice acting,” a third argued.

Others applauded their quick-thinking to fulfill their job duties in an efficient manner.

“Shoulda kept that one to ya self,” another commenter wrote. “Cause now I’m bout to start arguing with ALL automated voices thinkin it’s real people.”

A few users claimed to have utilized the same trick to deal with customers.

“LMAO when we would close and someone would accidentally end the automated recording on the headset we would pretend too,” one viewer claimed.

“When I worked at Starbucks I loved using my robot voice,” another noted.

Others came up with their own solutions for getting people to keep it moving in the drive-thru.

The Daily Dot reached out to Drey via TikTok comment.