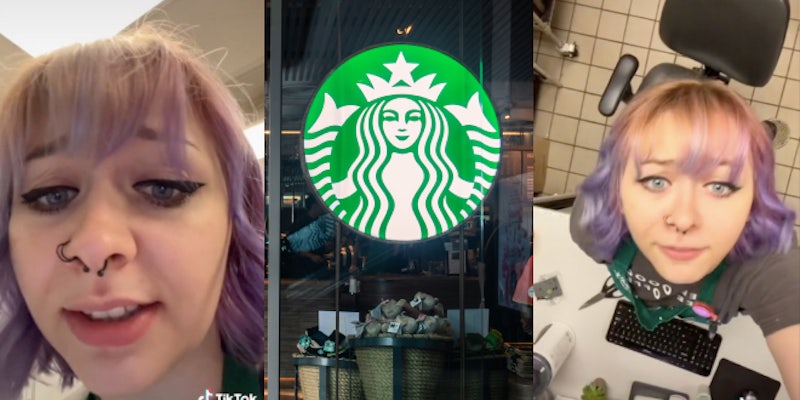 ‘Everyone always goes to the male supervisors then go higher up but never me’: Starbucks worker says customers ignore her because of her appearance

'I even have 'shift supervisor' embroidered under my name.'

In a viral video, TikToker Felicity (@fxlixity) shared that she is overlooked as a supervisor at Starbucks and boiled it down to looks.

“It just happens so often. I even have ‘shift supervisor’ embroidered under my name,” she added in the caption.

“It has happened, once again, that I have been overlooked as a point of contact,” she says in the clip.

Felicity explained that she knows she doesn’t look like a supervisor as she’s not that tall and has purple hair. Furthermore, the creator displayed how she walks around the store.

“I take it back. After I watched that video, I understand why I get overlooked,” she jokes.

“Everytime I answer the phone it’s ‘Can I speak to *male coworker,* I need to do *basic task*’ Like, hi, that’s my job,” one user commented.

“We have all women shifts and [shift managers] at my store and im boutta apply for an opening and be the only male shift and I think it’ll be the opposite, im overlook[ed],” another user said.

In response, Felicity said, “good luck my dude, I hope that doesn’t end up being the case for you. Also congrats on the promotion!”

“You would be my first point of contact because you just seem so welcoming,” a third user commented.

“Thank you so much, I try to be so nice to other service workers cause I know it’s rough out here, and it gets taken as being slow/stupid?! so silly,” Felicity responded.