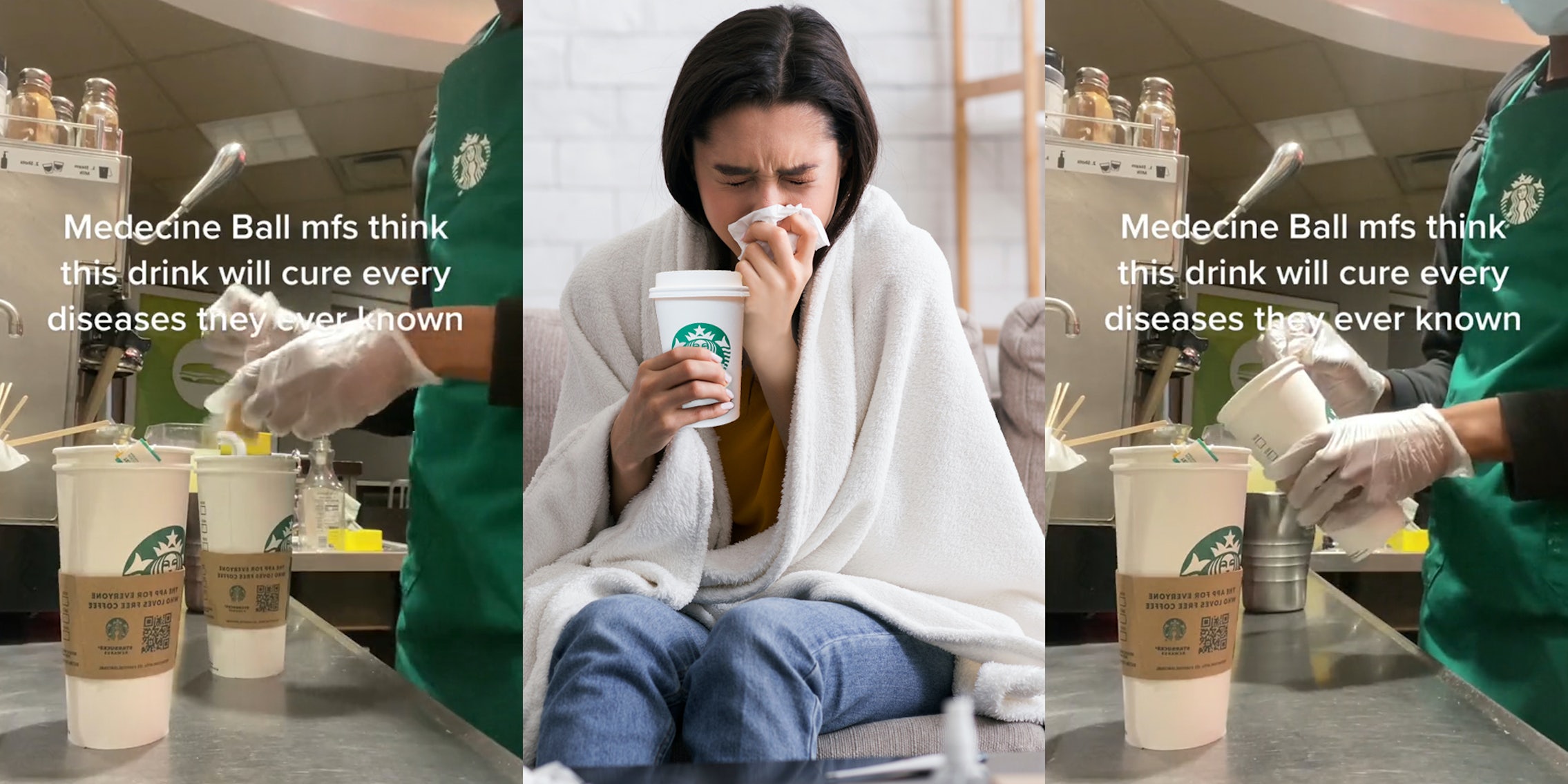 'I had someone ask for a medicine ball with extra medicine.'

A Starbucks barista went viral on TikTok after claiming that customers think the “medicine ball” drink will cure diseases.

The video was uploaded by user Fanta (@justfantaaa) who typically posts content about her job as a barista at Starbucks. In her recent clip, she issued a public service announcement for the popular “medicine ball” drink to her 286,000 followers.

In the video, Fanta stands behind the counter, making two drinks, opening bags of tea and putting them into cups. She vents her frustration in the text overlay, reading, “Medicine Ball mfs think this drink will cure every disease they ever known.”

In the caption, she writes, “IT WILL NOT, GO SEE A DOCTOR.”

The customer-favorite “medicine ball” is actually a tea called the honey citrus mint tea. The ingredients made for this drink are made Citrus Mint, Peach Tranquility, herbal tea, hot water, steamed lemonade, and honey. The drink is dubbed the “medicine ball” due to being soothing, described as a tea “that comforts from the inside out,” according to Starbucks which “can evidently relieve cold and flu symptoms,” per StarbMag. It doesn’t, however, contain actual medicine.

With the video amassing more than 5 million views as of Saturday, fellow Starbucks baristas shared their experiences with customers ordering the “medicine ball.”

“I told this guy we were out of the mint bag but can sub it he gon ask will it still have the medicine in it I h8 that drink sm,” one viewer shared.

“I had someone ask for a medicine ball with extra medicine,” a second wrote.

“Someone came through and asked what medicine is in the medicine ball,” a third said.

“people deadass tell me to put extra medicine it it and get mad when I explain it has no medicinal properties,” a fourth echoed.

Other Starbucks customers shared how the drink helped them when they were sick.

“But In all honesty this was the only thing that made me feel better when I had covid I ended up just buying the stuff to make it at home,” one person commented.

“When I had COVID this was all I wanted!! Don’t like making them don’t work there it’s seems so simple to make,” a second agreed.

“It’s just so soothing on a sore throat and stuffy nose!!! Been drinking these all week as I have been sick!” another said.

Several users, however, were miffed at being called out by the barista, saying the name shouldn’t matter so much.

“Honest question. Why do some baristas act like I’m asking for the cure to aging when I ask for a medicine ball?” a user asked. “Do they just not want to make it, cause I just like the flavor.”

“Starbucks workers hate their job so bad LMAO!it just tastes really good! If they hate when we say medicine ball how do we order it differently then???” another wrote.

However, several users pointed out it probably had to do more with the legality of the name than simple convenience for customers.

“It’s not they don’t want to pay it’s cause it’s a whole legal thing if they promote it having medicine in it,” a user wrote.

“I worked at Starbucks for a long time and they didn’t name it medicine ball because they could get in legal trouble for it,” another echoed.

One employee agreed, writing, “Sbux legal tells us we’re not allowed to call it a medicine ball bc it doesn’t contain medicine.”

The Daily Dot reached out to Fanta for comment via email and TikTok comment and to Starbucks via email.