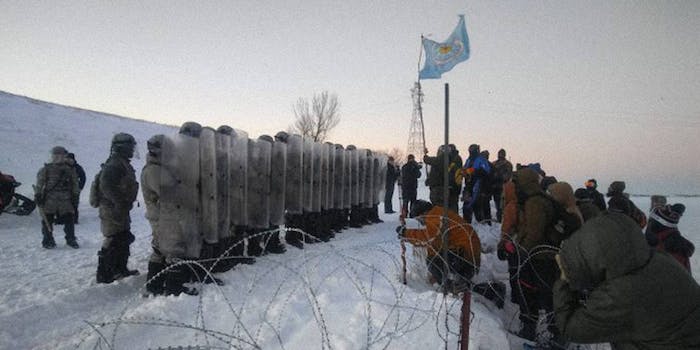 The next battle will be in court.

Ten protesters were arrested at a Standing Rock camp Wednesday, which was the eviction deadline handed down by the North Dakota governor and the U.S. Army Corps. to make way for construction of the Dakota Access Pipeline.

Several dozen water protectors remained at Oceti Sakowin camp overnight, with Gov. Doug Burgum saying they were free to stay but would have to leave voluntarily before cleanup crews came this morning. The protesters who were arrested had confronted police dressed in riot gear, according to Reuters.

“Take your belongings, remove anything that may be culturally significant, and we’ll help you get on your way if you need to do that,” Burgum said at a news conference Wednesday evening.

Independent media was targeted by police who chased us yesterday. Grateful to indie photog Rob Willson for this capture #StandingRock. pic.twitter.com/zD1gfH8TYZ

We stand.
We love.
We pray.
We fight.
We believe.
We work.
We unite.
We know that #WaterIsLife.
We stand with #StandingRock.
We are #NoDAPL. pic.twitter.com/x5flEXqQSs

In the week leading up the evacuation, the camp saw more than 300 demonstrators on site, but most left peacefully by Wednesday. At one point during the evacuation, several structures were set on fire—some said it was to release tents frozen to the ground, others said it was part of a tribal ceremony—with two people injured, according to CNN.

The Oceti Sakowin camp is on federal land in North Dakota between the Standing Rock Sioux Reservation and the route of the pipeline. For about a year, it has been the home of thousands of protesters demanding indigenous rights and environmental protections for the people of Standing Rock. The $3.8 billion DAPL project, which is slated for completion by April 1, would threaten sacred land, tribal burial sites, and water resources, they argue.

Good news briefly came for water protectors in December when the civil works department would not approve the easement required for construction of DAPL, but President Donald Trump ordered construction to start back up last month. However, the nonprofit environmental law organization Earthjustice recently filed a motion on behalf of the Standing Rock Sioux Tribe questioning the legality of Trump’s decision.