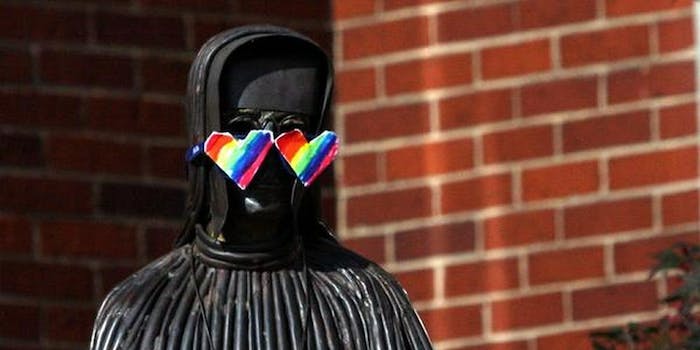 Lauren Brown's job offer was rescinded when the school discovered she was gay, she says.

In a twist of irony, a lesbian guidance counselor fired from an all-girl prep school in Portland, Oregon, has found outspoken support among an unlikely group: the school’s LGBT alumni.

It should come as a shock to no one that lesbians attend Catholic schools just like everyone else. But apparently St. Mary’s Academy, a prestigious prep school located in the lesbian capital of the U.S., didn’t realize that. Instead of recognizing the extremely high likelihood that lesbianism is part of its gilded girls-only halls, the school rescinded an offer it made to 27-year-old counselor Lauren Brown after discovering that she was gay.

The school, which purports a “dedication to social justice” and a “diverse community,” then tried to purchase Brown’s silence by offering her six months of salary and a full year’s worth of continued benefits if she signed a contract promising not to sue.

The hiring and firing documents were obtained and published by Portland’s Willamette Week. In the “Separation Agreement and Release,” a confidentiality agreement includes a bizarre loophole allowing Brown to post on her social media pages the following pre-written message.

“Friends, I want to let you all know that I will no longer be at St. Mary’s in the fall. Please message me if you know of any jobs available. I learned that my intent to enter into a same-sex marriage is in conflict with the teachings of the Catholic Church.”

“To sign a contract that’s going to affect the rest of my life, and my passion for advocating for LGBT youth and LGBT people—there’s no way I could sign that,” Brown told Willamette Week. “I could never live with myself.”

Oddly, Brown isn’t even engaged. She told the paper that she merely asked the school administrators what would happen if she someday wanted to get married, fully aware that she was taking what she hoped would be a lifelong position at a Catholic school.

St. Mary’s graduate Colleen Siviter, who attended the school in the 1990s, told the Daily Dot she was surprised and disappointed by the school’s act—mostly because it was such a safe environment for gay students even when she attended 20 years ago.

“I know so many people from my class alone and the class below me that are queer, that are lesbians,” said Siviter. “Going to an all-girls school is such a safe haven for that, for not needing to deal with the fallout from being queer.”

The school’s rationale for firing Brown was ostensibly due to the Catholic Church’s stance on same-sex marriage, but Siviter said there could be more to it. She cited a letter emailed to alumni on Wednesday in which school president Christina Friedhoff wrote: “We all recognize that now more than ever, we need to come together as a community so that St. Mary’s will continue to be a safe place for all young women.”

Student safety? Siviter wondered if that was a reference to having an adult lesbian working with teen girls, which would be strange given that the school also has male employees.

“We knew that there was staff who was gay. And this was in the late ’90s,” recalled Siviter. “In this time of gay marriage, of everyone being hyper-visible, it seems so moot. The focus is no longer on whether being gay is right or wrong.”

Siviter said that queer students were so common at St. Mary’s, one time two female students got reprimanded for making out in the hallway. “We were like, OK now we just won’t show public displays of affection in the hallway.”

It’s not only alumni that were angered by the school’s firing and subsequent attempt at silencing a lesbian staffer. Current St. Mary’s students protested by covering a nun statue with rainbows and other gay imagery on the school grounds.

These girls are upset with decision not to hire a gay woman as a school counselor. At St.
Mary's Academy. pic.twitter.com/qamU5iX3ZF

Students at the high school were interviewed for the Oregonian on Wednesday. One said that the school had “an unspoken rule of acceptance” that had been violated by the firing.

“In class we read the gospel like a book of love,” St. Mary’s senior Hannah Argento-McCurdy told the Oregonian. “These are not actions of love.”