The Squatty Potty looks like a typical medical device. It’s plastic, white, and efficiently designed but not too streamlined. It props your legs up while you poop and nothing more.

Squatty Potty is a small family business, based in Saint George, Utah. As the company explains on its site: “We have always been a very health-conscious family, but after a few years of some colon issues we were seeking a natural and inexpensive solution that would help correct and heal the problems we were experiencing.”

Squatty Potty is probably the least sexy product you can image, and yet, it is taking over the Internet. The product has over 75,000 Facebook likes and an Instagram feed full of memes. The company has a delightfully irreverent ad in the tone of the Old Spice commercials, complete with a puppet unicorn pooping rainbow soft serve, that’s been viewed over 40 million times on Facebook alone. A significant amount of those views came from a heavily promoted advertising campaign, but there’s no doubting its effectiveness or sheer ubiquity on the platform. Squatty Potty even has silly shirts that read “I pooped today.”

Can viral ads and social media actually make millennials buy one—and perhaps even more pressing, will it change the way they poop?

I used a squat toilet for the first time when I was 13 visiting family in India. It was a little complicated, as I had the dual problem of figuring out the squat toilet for the first time and figuring out how to hoist a sari around my waist while I used it. But after a few more tries and subsequent visits, I finally got the hang of it. It felt better. It went faster. And as someone who WebMD suggests might have IBS symptoms, all of that was important. But back in America where all toilets are two feet off the ground, it was difficult to recreate the experience.

I can’t deny that the Squatty Potty works.

That’s why when I saw the Squatty Potty on the reality show Shark Tank last November, I really wanted it. Last month, I finally acquired one.

Squatty Potty existed for years before its season 6 Shark Tank appearance. It was conceptualized by Bobby Edwards and his mother, Judy, who suffered from constipation and was told by her doctor that the squatting position would be beneficial. She found using a regular stool to be uncomfortable, so she and Bobby experimented with the design. They started by giving away their invention to family and friends.

“They thought she was crazy,” Bobby Edwards told the Daily Dot. “They discovered she was constipated and now they have this poop stool, which is even weirder.”

After evangelizing to friends, the mother and son team began to reach out to alternative health bloggers. Then they appeared on Dr. Oz and Howard Stern’s shows. Those endorsements continued to drive online sales, but they were still stuck when it came to retail.

“We had a lot of success online, but we had yet to get a retail partner because of the stigma,” Edwards said. Retailers just didn’t know where to put the product, or if they did, didn’t want something so obvious on the shelves.

Squatty Potty snagged a $350,000 investment from Lori Greiner on Shark Tank. Its increased profile helped with sales—in part, Edwards told Heavy.com, thanks to a deal Geiner helped secure with Bed Bath & Beyond. But he still felt something was missing—humor.

“There’s this novelty and funniness to it that I appreciate,” he said. “I was, like, this thing is hilarious.”

“It’s a good way to talk about poop without talking about poop.”

It also didn’t escape him that Squatty Potty is ripe for the kind of weird Internet treatment that goes viral. Edwards and his mom teamed up with the Harmon Brothers, who have created both viral videos and ads for toilet-adjacent brands like Poo Pourri. They ran through a few ideas (one ad riffing on the euphemism for “dropping kids off at the pool” didn’t work so well), before settling on the unicorn concept. As Edwards put it, “It’s a good way to talk about poop without talking about poop.”

Squatty Potty’s ad is both absurd and, at nearly three minutes, rather long for a commercial. It stars a sparkling unicorn puppet pooping rainbow ice cream soft serve-style on a magical assembly line, while a prince in a faux medieval getup tells the audience they “suck at pooping.” It explains how pooping with the wrong posture cramps your puborectalis muscle and how the product is “fit for a constipated king.”

Once you click the link to the Squatty Potty site, the messaging continues. The unicorn is there, as are illustrations of ice cream and the handsome prince. And the Squatty Potty brand name is now followed by a smiley face like :) —a joke on their tagline, “happy colon: happy life.” 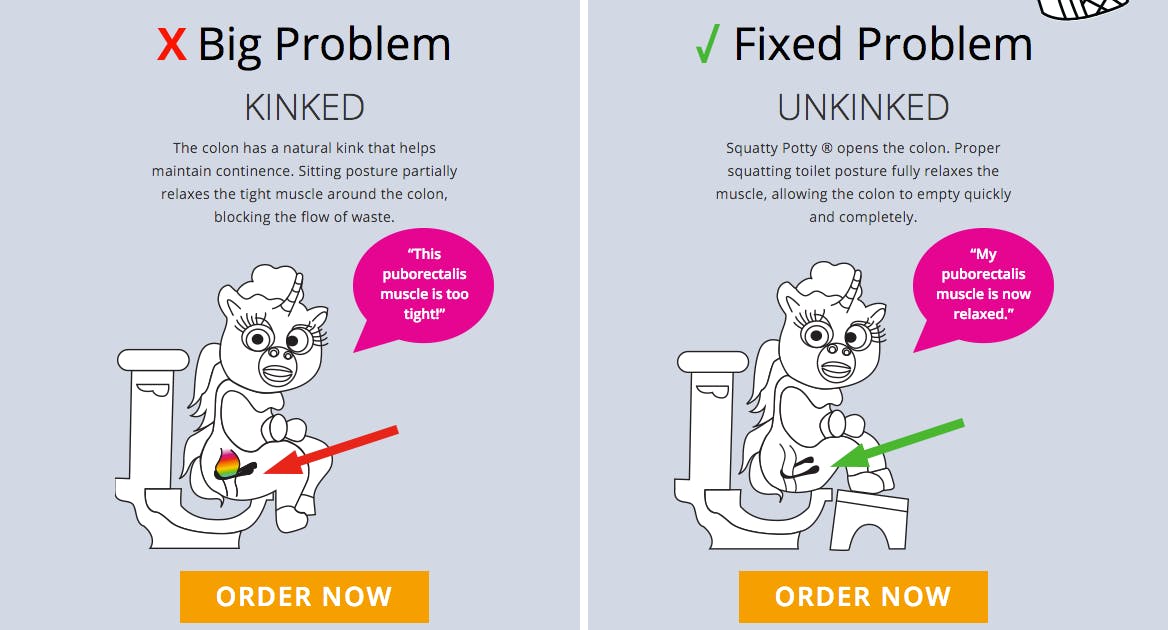 Since debuting in October, the ad has racked up 8 million views on YouTube, and visits to the Squatty Potty site have climbed by about 400 percent, according to numbers provided by Edwards, with men and women ages 25 to 34 as the top demographic. (This group had always been Squatty Potty’s demo, but the gap between that one and men and women ages 3 to 44 has become more pronounced.) That corresponded to sales as well, with men ages 25 to 34 being the top buyers. All in all, the commercial worked.

I can’t deny that the Squatty Potty works, too. Since having one in my home, it has made some poops easier and faster—and I quickly grew used to it. About a week after mine arrived in the mail in nondescript packaging, I had the need to poop while out at a bar with a single occupancy bathroom. My bowel movement took some time and I heard a line forming outside the door. It was then that I genuinely wished that bar had a Squatty Potty. Being rid of the anxiety of taking too long in a public bathroom would have been magical.

Still, I found that the Squatty Potty is not without its issues. If you stand to pee and store it around your toilet like it’s designed, foot placement becomes awkward. If you’re tall, you may find your knees pushed up into your face. If your toilet seat is hard and uncomfortable, being in a squat position only makes that fact more obvious.

But the most difficult part about having a Squatty Potty may be having guests over.

The Squatty Potty is also designed to be a conversation piece, the first step in erasing the stigma around pooping. “We’re so uptight about it,” explained Edwards. I found, though, that my new pooping accessory did little to make the conversation less awkward. “Is that a Squatty Potty?” my guests asked as they come out of my bathroom. Plenty of people have heard about it, and some express a vague interest in wanting one. But nobody confided in me about any colon issues or even used the word “poop.” For now I can just saw I got a Squatty Potty because of an assignment and that it’s for research.

The most difficult part about having a Squatty Potty may be having guests over.

My concerns may not be universal, as the Squatty Potty brand is expanding: The company now has sleek bamboo models of its signature product and a bidet attachment that fits most Western toilets. Its without a doubt the buzziest medical device on the market right now, and its taken the concept of viral marketing to the next level with an ad that elevates the product from a bathroom accessory to a lifestyle change.

The Squatty Potty inspires hope that if we can laugh at a unicorn pooping, maybe we can talk about our own poops without worry. But I can’t promise I will continue keeping it in the bathroom when company comes over.