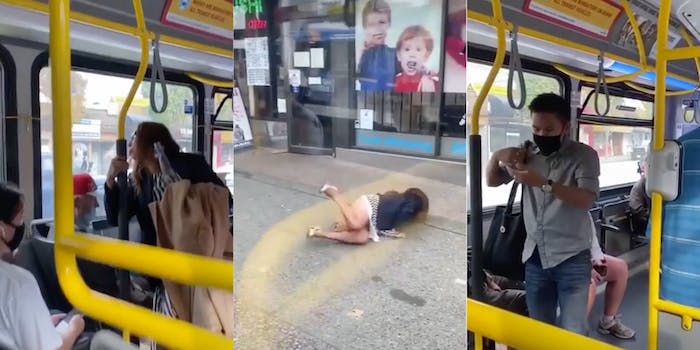 'What is wrong with you?'

A “spitting Karen” was caught in the act in Vancouver and pushed off the transit bus by her victim.

The now-deleted TikTok video that on Thursday began trending on Reddit starts on a Vancouver TransLink bus, with an Asian man, initially off-screen, calling the standing woman “disgusting.” She’s the only person not wearing a mask, which is presumably at the center of a contentious conversation that’s occurred just as the filming starts.

However, the woman is tired of talking, and while making clear she didn’t care about the man’s comment or his life, she spits in his face.

The man pops up and pushes the woman. As she goes toward the open door, he shoves the “spitting Karen” off the bus. She tumbles to the ground, in front of a sushi restaurant.

An older patron curiously asks the man, “What is wrong with you?” He tells the woman that the Karen had spit on him.

As u/johnhamelink wrote: “Most people were probably not paying attention until he did that. If I spun round to see a man pushing a woman violently with no other context, I’d have said the same thing.”

The man wipes off her spit and goes on back to his seat, unconcerned about her well-being.

The comments ran the gamut, from critiquing the camera work to the disrespect the woman showed. Most of the other redditors, including women, said the woman got what she deserved, given the world remains in a pandemic.

U/BadlyDrawnMemes wrote, “Even pre covid she deserves that and worse. Spitting on someone is like one of the most entitled and disrespectful [things] someone can do.”