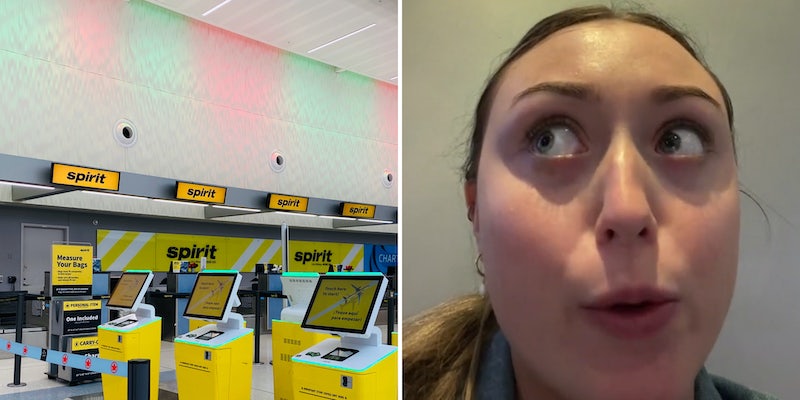 ‘Did they leave with an empty plane?’: Customer says Spirit Airlines moved flight time up—and notified her two minutes after the plane left

'If you need one more f*cking reason to never fly Spirit, here it is.'

In a viral TikTok video, customer Kaley Reed (@kaleyreed_) says Spirit Airlines emailed her about the change of her flight time two minutes after the plane left.

“If you needed one more fucking reason to never fly Spirit, here it is,” the TikToker says.

Reed says their flight was scheduled to leave Las Vegas at 4pm, and they arrived at 2:45pm to check in. “That’s like, plenty of time, right?” she says.

However, when Reed made it to check-in, the Spirit employee told her the flight had already left and that she should check her email for the notification about the flight time change. Reed says she received an email at 3:02pm that said the flight would leave at 3pm, instead of an hour later as planned.

Reed says she spoke with many other Spirit customers who were supposed to be on the same flight, but missed it due to the late notice. She also says customer service provided no help, refunds, or compensation.

“We’re trying to talk to the customer service rep, and she’s like, ‘You missed your flight. It’s your fault,’” she says. “I just don’t know how they’re getting away with this.”

In a follow-up video, Reed says she disputed the charge through her credit card company, American Express, and she was able to get her money back. Spirit’s customer service team reached out to her on Instagram, but she says they soon ghosted her.

Reed and her husband had to stay in Las Vegas for two additional days before they could get on another flight back home on Southwest Airlines. She says her husband missed two days of work as a result.

“Never fucking fly Spirit,” Reed says. “Don’t do it. Pay the extra, however many hundred dollars it is, to get a Delta flight because they are reliable, they will get you to your destination. And if you fly someone else you’re going to have to spend extra money anyway.”

Her initial video received over 8.6 million views, and many viewers were shocked, but not surprised.

“Did they leave with an empty plane?? Lmfao,” one user said.

“The fact that Spirit is still an operating business baffles me,” another chimed in.

“I’ll ride on Heelys across the country before I fly Spirit,” a third user joked.

Several others shared their own horror stories when flying with Spirit Airlines.

“Waited 7 hours at the airport yesterday, delayed 4 times, and then canceled… thanks Spirit,” one user said.

“Literally stuck in Cancun right now because Spirit canceled the flight. Can’t get home for another 2 days. At least I have margs…,” another user claimed.

“The 1st & last time I tried to fly (Spirit) my flight there got cancelled less than 24hrs before and the flight back got cancelled while we were boarding,” a third user shared.

The Daily Dot reached out to Reed via email and Spirit Airlines via email.