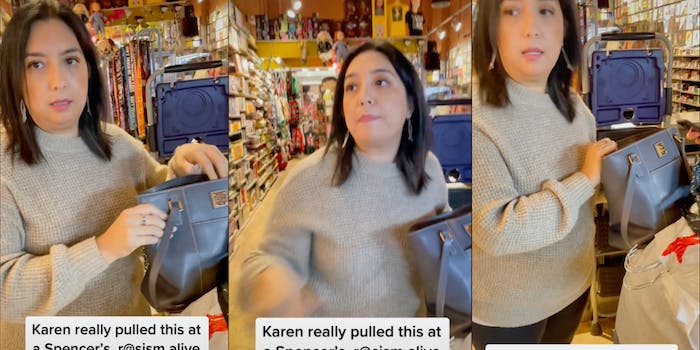 ‘What do you want him to get f*cking naked, lady?’: Spencer’s ‘Karen’ falsely accuses man of stealing her phone in viral TikTok

She accused him of turning off her ringer.

A so-called “Karen” at a Spencer’s store was caught on TikTok accusing a man of stealing her phone.

The video, uploaded by user @fuxktdub, shows the woman searching through her purse for her “lost” phone after accusing a random man of stealing her device. The conversation between the TikToker, her accused friend, and the woman is mediated by a Spencer’s employee.

The video was posted this week and has already received more than 1.9 million views.

“Can you call it? Because she won’t let us call it,” the TikToker said to an employee, referencing the phone.

This comment, however, prompted the woman to accuse the TikToker’s friend of turning off the ringer so she couldn’t find her phone. “What do you want him to get fucking naked, lady?” the TikToker said in response.

As the video goes on, the woman rummages in her purse for her phone. When she can’t find it, she continued to accuse the TikToker and her friend of stealing it.

Eventually, the Spencer’s employee calls the woman’s number from another device and the Karen then finds her phone sitting in her own purse. She then apologizes to everyone she accused.

“Fuck off,” the TikToker responded as she and her friend walk away. “No you’re not [sorry].”

In the comments, users were quick to jump to the TikToker’s defense. Many accused the woman of knowing her phone was in her purse the entire time.

“That purse isn’t that big,” one person wrote. “She knew it was in there.”

“LMFAOOOOOO I know she saw her phone,” wrote a second commenter. “You can see it [in] her eyes.”

“Her face was so red because she found it in her bag,” said a third viewer. “And look at how she continues to lie even after she found it.”

The Daily Dot has reached out to @fuxktdub via TikTok comment.