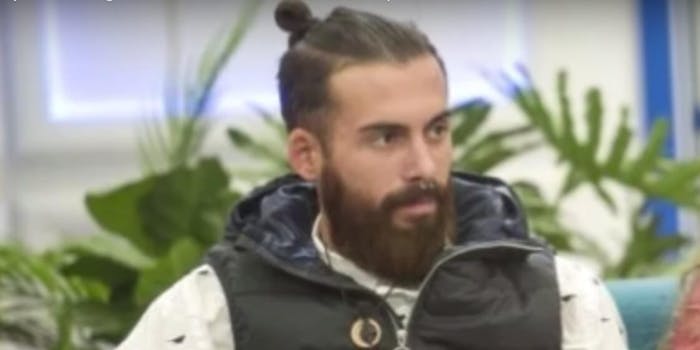 Amid backlash, advertisers are backing out of the show.

Spain’s Big Brother is facing massive backlash after footage was leaked, showing a contestant being forced to watch a video of her own alleged sexual assault.

The incident occurred in November 2017. The contestant, Carlota Prado, did not even know she was assaulted before she saw the footage.

José María López was accused of penetrating Prado as she was passed out after a night of drinking. López and Prado were in a relationship on the show, and she can be heard telling him “No, I can’t,” before passing out, according to the BBC.

He only stopped penetrating her once the show’s producers spoke to him over a speaker in the room, according to the Independent.

He was removed from the show later that day and has since denied the allegations.

A day after the alleged attack, Prado went into a room, dubbed “the diary room,” and production allegedly said to her, “We think you need to see this, Carlota.” She reportedly pleaded with production to spare her the details. According to the Sun, she begged to leave the room and was told she couldn’t.

El Confidencial received footage of Prado in the diary room. She reportedly sobbed and asked for medicine because of the way she felt her heart beating.

Production wouldn’t let her see her housemates when she asked, according to the BBC.

The production company, Zeppelin, told the Independent it had no plans of airing the footage.

Amid backlash, advertisers are backing out of the show, and the hashtag #CarlotaNoEstasSola (Carlota you are not alone) has been making rounds on social media.

“I am disgusted and appalled,” one Twitter user wrote. “A young woman was raped while unconscious at the set of Spain’s Big Brother and then the production made her watch the footage without any psychological assistance for her. Her name is Carlota Prado.
#CarlotaNoEstasSola”

carlota prado watching herself be raped and big brother not doing anything makes me so mad , this definitely could’ve been prevented and they let it happen .

@ProcterGamble
hi:
I am writing to you from Spain to send you the attached video. Your company sponsors this tv show: Gran Hermano. As a regular client of your brands, I beg you to reconsider the association of your image with facts like the one I show you.#CarlotaNoEstasSola

@tousjewelry
We are waiting yo hear that Tous breaks contact with GH. its an important day, we are not the same. If someone shows lack of humanity we wont forget It. #CarlotaNoEstasSola

Lopez has reportedly denied the allegations.