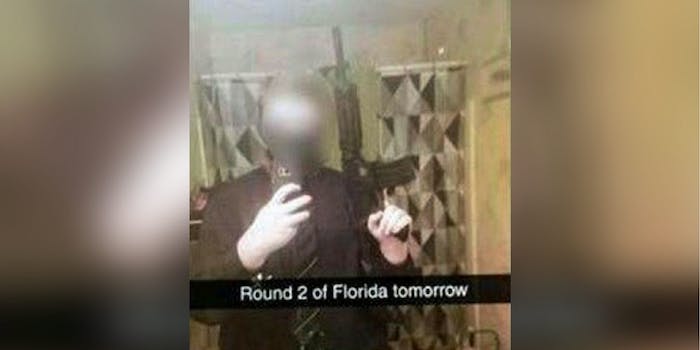 One teen made 'Florida round 2' threat and told police it was a joke.

Less than a day after police say 19-year-old Nikolas Cruz opened fire at his former high school in Parkland, Florida, killing 17 people and injuring others, South Carolina police have arrested another high schooler for making a copycat threat.

According to NBC affiliate WSPA, a ninth grader at Broome High School in Spartanburg County, South Carolina, made a threat to initiate “Round 2 of Florida tomorrow” on Snapchat on Wednesday.

The Snapchat post featured the student wearing a mask and holding what appeared to be an assault rifle but was later determined by the Spartanburg County Sheriff’s Office to be an airsoft rifle. After authorities were notified of the post by the parent of another student, they came to the student’s house, but were told by the student that he was “joking.”

The student has been arrested and charged with disturbing schools, and was transported to the state’s Department of Juvenile Justice. He will likely have a hearing on Friday, WSPA reported.

Several other “copycat” threats have been made in the wake of the Parkland shooting, the New York Daily News reported. In Ross Township, Ohio, police detained and charged a high school student for “inducing panic” by making a social media post related to the shooting. Two Fresno, California, high schools increased their police presence for Friday after an image of a rifle with a caption threatening students circulated on social media.

A student at Clarksburg High School in Germantown, Maryland was also charged on Thursday with bringing a loaded 9mm handgun to campus. Then, at North Broward Preparatory School, eight miles out from the Parkland shooting, a Broward Sheriff’s Office deputy accidentally shot his weapon while responding to a false alarm call placed by a teacher who thought she heard a gun go off on campus. He injured his leg but was treated at the scene.