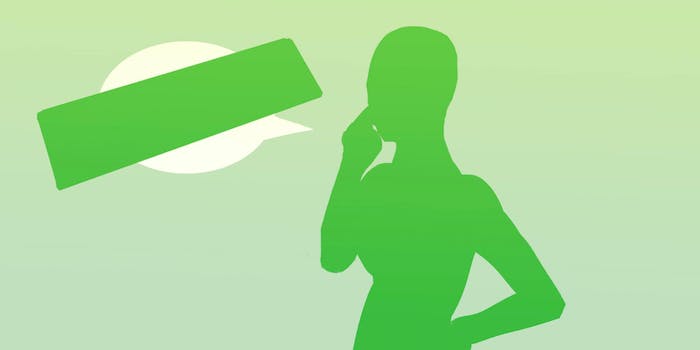 Is it ever OK to lie to your friends about your whereabouts on social media?

When you want to bail on one set of plans for another, but you need to Instagram your benedict.

“If I don’t feel like doing anything and someone asks me to hang out, I just say I have homework and then avoid texting them or posting anything,” high school student Maya Grinberg explains.

We’ve all been there. Canceling plans on a friend, but later finding ourselves at brunch with another—it happens. And while there’s a certain guilt that comes with lying to our loved ones when we just don’t feel like following through with pre-set plans, this kind of fibbing in the age of social media seems commonplace.

So has telling a white lie become somewhat acceptable now that we’re expected to be online and available 24/7?

caught someone lying to me saying he wasnt in school, then look on snapchat where he was LOL

With so many geo-location tagging and “live” posting options, like Snapchat’s, “people have to go to greater lengths to lie about their whereabouts,” Karen North, director of USC’s Annenberg Program on Online Communities, tells the Daily Dot.

Of course, this type of human behavior isn’t new by any means, explains North. “It’s the equivalent of sneaking out on a date and telling their parents they’re at a friend’s house,” she says.

Except these days, thanks to our growing obsession with documenting our every move on social media, it’s a little harder to privately make plans without letting anything slip. Aside from, you know, being upfront with your friends, you can either stay offline altogether while you’re out and about (the more unrealistic plan), or invent a new lie while you go off and do your thing freely.

Thanks to our growing obsession with documenting our every move on social media, it’s a little harder to privately make plans without letting anything slip.

Erica Santos, a freshman at Montclair State University, knows this conundrum all too well. She remembers a time she lied to her dad about going to a birthday party instead of spending time with him—which, of course, backfired. “I accidentally posted a picture on Snapchat, and my step sister ended up mentioning it the next day in front of my dad,” she says. “He wasn’t happy.”

Guilt and fear of getting caught have always been great motivators for not lying, but that doesn’t mean they will stop us. Grinberg said she may’ve felt bad about making up excuses to avoid her friends, but she still believes that her actions were OK because, in her own mind, “she had a valid reason.

When asked if the situation has deterred her from lying again, Santos said she’s definitely more careful about how her posts will be perceived by her social media followers. “Now I think twice before I Snapchat something.”

“The lie is in the omitting,” said North.

If we’re all in this social-media-check-in world together, are our friends going to be so cool with it when they discover our lies and omissions?

“I’ve had several occasions where my friends lied to me and I’ve just played it off,” explains college student Sara Juszkiewicz, who attends UCLA. However, the straw finally broke when Juszkiewicz had surgery and was virtually ignored by pals—who’d been posting photos near her home—but never bothered to check on her in her time of need.

“I had a near death experience when I had jaw surgery,” she says. “Till this day, I haven’t spoken to my close friend Kat. She has made several accounts on social media to try to reach out to me to apologize.”

Letting a lie slip on social media causes a hurt human reaction the way it always has, way before the Internet.

According to North, letting a lie slip on social media causes a hurt human reaction the way it always has, way before the Internet. “As humans, relationships are built on trust and shared experiences,” she says. “So when people lie to their friends and lose trust, it ends up affecting the relationship itself in some way.”

High school student Colin Harty is familiar with such consequences. After attempting to “drift away” with some friends during a group get-together, Harty admitted that keeping the rest the group in the dark wasn’t as simple as it seemed. “We made a hard effort to make sure no one posted anything on Snapchat, but that failed, and the other friend found out and he was salty.”

“When you look at social media, one thing we all have to remember is that humans are social animals, and our styles and expectations have been consistent for generations,” says North. “It’s all about what’s proper etiquette and the social norm. And so people’s feelings get hurt when others violate those rules.”

Perhaps the old adage is true: Honestly really is the best policy. Especially in the era of Snapchat filters.