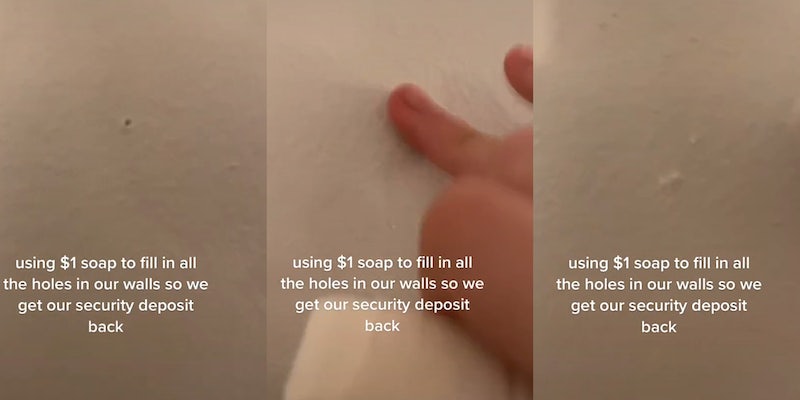 ‘It’s what the landlord deserves’: Renter uses $1 soap to fill holes in wall

A viral TikTok video shows a renter using soap to fill in the holes in her wall to ensure she gets her deposit back after moving out.

The renter, Elise (@oprahsharvestday), showed herself using a $1 bar of soap to fill in the holes before smoothing them over to hide them. In the video’s caption, she says the home “smells like a hotel” after using her hack.

As of Tuesday, her TikTok received about 800,000 views on the social media platform.

♬ secrets from a girl who SLAYED remix – Matthew

Elise’s viewers had a range of reactions to her unconventional hack.

One viewer asked in all caps: “DOES THIS ACTUALLY WORK.” Other viewers chimed in in response to the question confirming that soap does the job, but other hacks also work.

Some viewers shared what they usually use to fill in holes in the wall before moving out of their rented homes.

“I use ranch,” one viewer commented.

“Girl i was using toothpaste,” a second viewer commented.

A third shared, “i used white out tape.”

Other fill-ins included chalk, art clay, and rolled-up pieces of toilet paper. Some viewers said the unconventional choices weren’t worth the effort, claiming that many inexpensive stores like Dollar Tree sell spackle.

But others said landlords deserve it when their tenants use things like soap instead.

“Its what the landlord deserves,” one user said.

“You’ve seen the landlord special! Now get ready for the tenant special,” another user wrote.