John pauses and watches his inbox for a moment. “Let’s see how long it takes him to respond.”

Some may be even younger.

A few weeks ago, John, who is in his mid-30s, followed a string of lewd photos down a Snapchat rabbit hole and discovered one of these amateur compilation Stories. He began chatting up a few of the guys whose usernames were displayed on their photos and videos. After a few back-and-forth texts, one of them confessed he was 15 years old.

John flipped out. He deleted the boy’s contact information. But as he browsed more of the X-rated Snapchat Stories, he began to see a disturbing pattern. Many of the young men added birth years to their usernames—Lickme88, Denver93—and some of those numbers were 97, 98, and even higher, suggesting the users were underage.

It’s no surprise that teenagers trade nude pics on Snapchat. The photo-messaging app has always been a relatively safe space to trade NSFW stills: All photos self-destruct after a few seconds, and taking screengrabs is discouraged. The ephemeral nature of the casual snap is what makes it so enticing. But these X-rated Snapchat Stories are a new development.

Snapchat unveiled its Stories feature in October 2013. It’s a simple but sophisticated video-editing tool that lets users turn photos, clips, and text into a narrative to share with their friends. Stories live for 24 hours before they disappear, “making room for the new,” as Snapchat described it in a blog post announcing the feature. The aggregators release original compilations right on schedule, virtually every day.

BoyConfessions and another account, BoysCollection, are just two of a number of Snapchat aggregators that specialize in X-rated compilations of teenagers and young-looking men in their 20s. They’ve amassed a cult following among young gay and bi men on Snapchat who are looking for new ways to meet strangers. The videos offer endless variety and an abundance of attractive men. Users submit themselves because they’re looking to expand their network and find new friends on Snapchat.

For many, it’s a win-win. Guys submit nudes to these aggregator accounts so they’ll be featured in their compilations. The compilations get thousands of followers and, in turn, send hundreds, even thousands, of fans to each user. It’s a 100 percent curated experience. The Stories are like a colorful menu. Just pick who you want and start snapping.

If you want to be featured, here’s how the process works: You take a selfie or a video of yourself, then snap it directly to one of the Snapchat video aggregators. Follow the rules: “snap me full face,” “rock hard cock,” and “face w/ass or cock,” reads one popular account. Another: “no soft dicks” and “turn on the light, bros.” As requested, you send a private message with your submission—“a sexy pic showing your body, face, or both”—and add your username. BoyConfessions and BoysCollection ask you to give them shout-outs in the text you add to your snaps. Other aggregators might ask you to send them a certain emoji if you want to be featured. 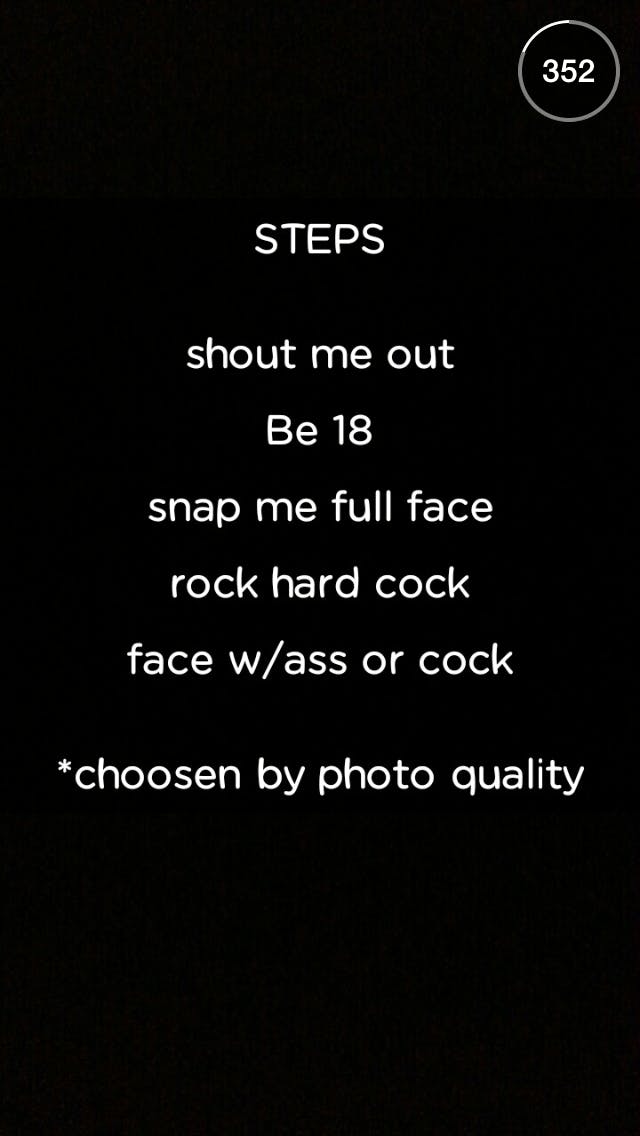 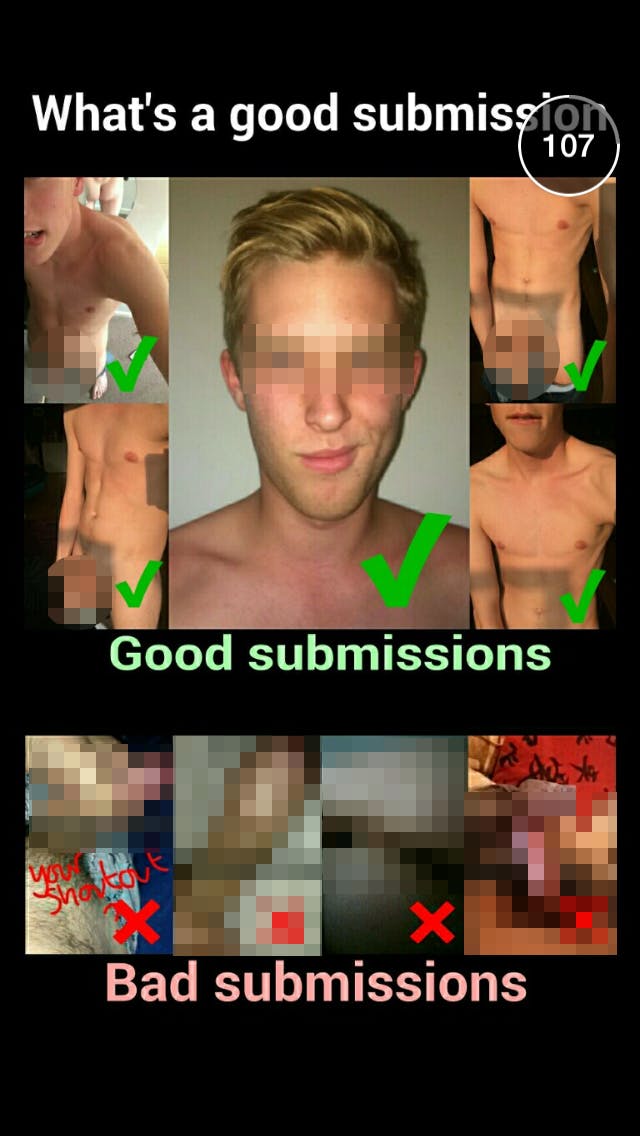 One person John met through a Snapchat Story told him he was one of 50 people he chatted with every day. A thousand more were viewing his nudes. He said he was 17. On the anonymous social Web, the teens can pretend to be any age they want—but, alarmingly, they’re tipping off fellow users that they’re potentially minors. The video curators don’t seem to mind, even if they include the occasional “Be 18” warning (“because I don’t feel like going to jail,” one wrote). They choose to include usernames like TexasHeat98.

But if underage users sneak in, who’s responsible?

There is nothing stopping two users from snapping each other private X-rated photos, regardless of user age. Snapchat has never interfered with that. It gets messier when underage users are snapping nude photos to aggregator accounts, whose owners edit the boys’ photos into videos and pimp them out publicly. Once it’s out there, anyone can screengrab the nudes, and the person in the video won’t be notified. Those screenshots “can, and will, be everywhere,” John warns.

What can, and should, Snapchat do? I spoke with Eric Goldman, law professor at Santa Clara University and an expert on Section 230 of the Communications Decency Act, which protects platforms like Snapchat from liability for user-submitted content. Presumably, Goldman said, if Snapchat users were remixing and publishing child pornography, Snapchat would be safe—unless the case went to federal court:

Section 230 excludes federal criminal prosecutions. If the U.S. Department of Justice prosecuted Snapchat for child pornography distribution, Section 230 would not apply. Still, such a prosecution isn’t likely, nor would Snapchat likely lose the case (despite Section 230’s unavailability). Based on the facts you describe, it’s highly unlikely that Snapchat has legally sufficient knowledge that a particular snap is child pornography. The fact that some usernames might imply the users’ age doesn’t change that analysis.

Goldman said that adult Snapchat users could put themselves in legal risk for sharing underage content, even if they’re unaware what they’re sharing is illegal:

One issue is that user accounts aren’t verified with their Facebook or Twitter profiles. (The anonymity is part of Snapchat’s appeal.) So naturally, the usernames in the amateur video compilations are throwaways. (“No one is telling their IRL friends, ‘Follow me at @gaycocklord,’” laughs John.)

Goldman traces this issue back to the bulletin boards of the early Internet. “As underage users have greater access to online publication tools,” he said, “we’re seeing an exponential growth in the creation of what the law considers ‘child pornography.’”

The problem is that these services are simply too large to realistically monitor or censor, so they shift the burden of doing so to the users. But with Snapchat, that freedom is the appeal. John admits that this is the “beauty of Snapchat” but also its biggest danger: “It’s a place where pederasts can go because it’s safe.”

To be clear, this is not a Snapchat issue. It’s a Snapchat Stories issue. Stories aren’t one-on-one private messaging—they’re exhibiting users to the world. Once a teenage boy’s naked body gets aggregated into a Snapchat Story on a big-time aggregator account, he unwittingly surrenders all control over that footage. The Stories are public, viewable to everyone.

“The thing is, this goes against everything we as gay men know about sending nudes,” John marvels. “The first rule of dick pics is no face and cock in the same pic. But, no matter if they’re 15 or 23, they’re all doing that. Three-fourths of the pics I see on the Stories are face and cock.”

Snapchat Stories have become an underground candy store for naked males of all ages.

Snapchat did not respond to a request for comment at press time.

Names and usernames have been changed.