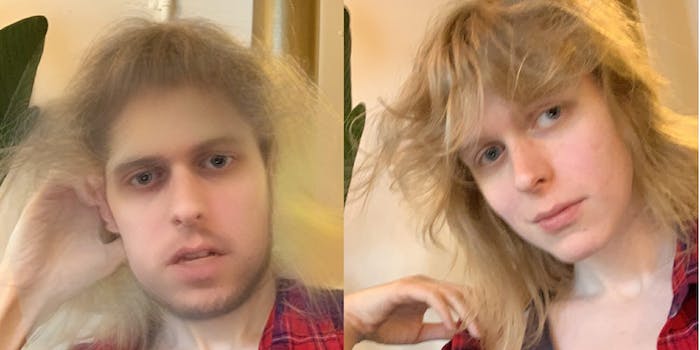 Why is the app programming stereotypes?

Would you like to know what I look like as a guy? And no, I don’t mean my pre-transition photos. If you download Snapchat on your smartphone, you can try out its new “gender-swap” filter. Boys, girls, and everyone in between can see what they would look like if they were to fall on the far ends of the gender binary and doused in flattering lighting.

The filter blew up on social media last week after users began posting gender-bent versions of themselves, including male celebrities as women. Plenty of users have since joined in with their own fun.

After seeing @Kross use the gender swap filter on Snapchat, I had to try it myself… pic.twitter.com/scH8GETL0R

I’m late to the Snapchat filter but LOL pic.twitter.com/vSXdys1ImJ

Picard is a babe pic.twitter.com/WfZ731cTst

While gender-swap generators aren’t particularly new, Snapchat’s filter is pretty impressive compared to the static, 2D automated photoshop systems of yesteryear. Google Brain research engineer Eric Jang suggests the gender-swap filter might rely on the machine learning neural network CycleGAN and “the billions of selfies [Snapchat’s owner] Snap has, er, not deleted in the last eight years.” This makes sense, given that Snapchat’s terms of service gives Snap and its affiliates the right to “host, store, use, display, reproduce, modify, adapt, edit, publish, and distribute” photos for both research and development purposes.

Bout to go stealth you want anything pic.twitter.com/iTBDNWp6Yh

There’s a long history of internet users playing around with gender expression online, whether through roleplays in private, queer spaces, or playing video games as a cute anime girl. But Snapchat’s gender swap filter is one of the first times that a company has deployed a free, sophisticated real-time filter that calculates users’ faces through machine learning and depicts them as either a man or a woman. It’s one thing to think about yourself as another gender. It’s another when a camera turns that fantasy into a reality.

This isn’t inherently a problem. In fact, the gender swap filter can spark necessary conversations about how men and women are perceived. Because the algorithm gives men rugged beards and square jaws and the female swap features pristine, long hair, and flawless pale skin, comparing the two can be eyeopening for men. As it turns out, turning other men (or oneself!) into a woman opens up a rabbit hole for exploring one’s gender and sexuality.

The filters are also a great opportunity to compare how men and women are often gendered.  Feminized users look like pristine angels wearing just the right level of makeup, and it really emphasizes how women are expected to be blemish-free compared to their male counterparts. Women should adhere to the utmost rigorous skin regimen and be only seen in soft-focus lighting, whereas men can get away with a nice shave and a decent hair cut. It’s jarring, to say the least.

Granted, some men are more hesitant than others to be feminized.

I wanted to ignore this. The wickedly wise have a agenda to effiminize boys and men and masculinize our women. Snap chat has a filter turning gender roles around. NBA/NFL players wearing dresses. Women wearing neckties. What's next. Now men record their women fighting men. https://t.co/S20j9HPXW1

Then there’s the filter’s room for gender experimentation. For a pre-transition trans person living with gender dysphoria, the gender-swap filter depicts what they might look like if they transition. It can spark gender euphoria in people that cannot transition yet or are still figuring themselves out. And because the filter is so realistic, it can really open up a closeted trans person’s eyes.

But Snapchat’s gender-swap filter has received a fair share of criticism from trans people and gender nonconforming folks. For one, the male and female filters are both incredibly stereotypical depictions of what it means to be a man or a woman.

Take my own selfies. While the first and last photo below use the male and female Snapchat filters, respectively, the middle photo is how I normally look while walking around. For a point of reference, I’ve been on estrogen for just over three years.

Besides the obvious issue with the first photo—Snapchat doesn’t play well with my windblown hair—the way I’m depicted as a man isn’t actually how I looked before I transitioned. For a more accurate, real life “gender swap,” check out this before/after tweet I made in April.

And here’s another from December.

Before I began HRT, I already looked meek and feminine. Strong jaw aside, my face was soft and slim. Snapchat’s male filter, on the other hand, expands my jaw and gives me a slightly wider head. It makes me look bigger than I actually was when I was pumped up with testosterone.

And as for my female gender-swap, the filter straightened my hair, shrunk my eyes, gave me flush lips, and threw on a ton of makeup to smooth out my blemishes. Just like my male filter, my female one is an exaggeration of how I actually look as a woman. It’s not just a fantasy; it clashes with the rest of my body. To quote one of my Twitter followers, “I didn’t realize Snapchat released a Junji Ito filter.”

I love this because my neck looks way too long pic.twitter.com/gqltGPakC1

But all this is in good fun, right? Well, no. Snapchat does this on purpose. It’s much more impressive to turn cis men into beautiful, attractive women than simply show them what estrogen would do to their bodies. By depicting men as strong and bulky while portraying women as dainty, beautiful creatures, both filters play into the gross oversimplification of gender roles that dictates our daily lives. It’s why women wear makeup and men get “War Paint.” It’s a cute gimmick on the surface, but it reinforces the same old cissexist gender roles that gatekeep trans men and trans women while erasing gender nonconforming folks.

‘Gender is not binary! Gender does not exist.’

oh so if queer people play around with gender, it's called "unnatural" and "gross," but if cishet people do it, it's called a snapchat filter? okay then.

And that’s not to mention the major surveillance risks at play for marginalized Snapchat users. Privacy educator Janus Rose warned me that selfies “contain biometric information” that can be used en masse by governments and companies to “persistently identify and track people across time and space based on things like facial features.” She stresses that users should “strenuously object whenever [selfies] are retained for any reason.”

“It’s easy to see how this makes targeted oppression and harassment possible on a scale previously impossible,” Rose told me. “Think about how many times your face passes in front of a camera on the street every day—when governments and corporations mine our biometric data, they are collecting raw materials for machine learning systems that may not serve our best interests.”

That’s not to write off gender-swap filters altogether. But a one-size-fits-all approach to selfie filters by a major start-up with a shady terms of service will inevitably invite some to play along at the expense of others. If we want to hold tech companies responsible for their impact on society, we need to think critically about the messages behind all of its products, including the toys we use to pass the time.

“When machine learning systems are built to recognize gender based on mainstream cis standards of ‘male’ and ‘female,’ its designers reinforce the same inaccurate views on gender that are used to categorically treat trans people as second class citizens,” Rose said. “These gender filters might be ‘fun,’ but they are constructed based on the same false and harmful assumptions about gender that the Trump administration has used to justify its oppression of trans and gender-nonconforming people: that gender is binary, unchangeable, and based purely on how the cis, heteronormative world perceives and judges us.”

So before you go ahead and swap genders, think about who you’re letting onto your phone. Take it from a trans woman: You may get more than you bargained for.