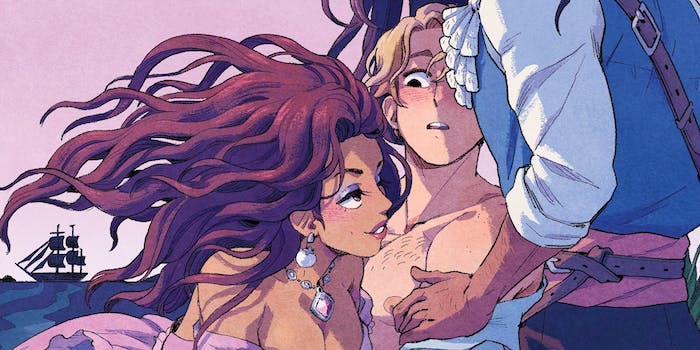 Iron Circus Comics’ popular adult comics series Smut Peddler is back with its sixth anthology, and this one is all about raunchy historically accurate fiction. From now until Dec. 4, fans can back Smut Peddler Presents: Sordid Past on Kickstarter and receive their copy in time for the summer.

Sordid Past focuses on stories from “Neolithic Britain to Pharonic Egypt, ancient Sumeria to Renaissance Italy, ’80s America to 13th century Finland,” Iron Circus Comics’ Kickstarter says. The anthology, which is in full color, is unabashedly sex-positive and features a series of queer-inclusive comics that make plenty of room for lesbian and gay love across history.

The Kickstarter is already off to a great start: In less than 24 hours, Smut Peddler Presents: Sordid Past has already been funded by over 250%, with more than $54,000 contributions from 1,800 backers. Iron Circus Comics also offers artists a $5 page rate increase for every $5,000 the Kickstarter makes over its goals, which by Tuesday morning already surmounted to six pay increases.

It’s no surprise that Smut Peddler turned to historical erotica for its latest anthology. It’s been a difficult year, as Iron Circus Comics head C. Spike Trotman said on Twitter. “[W]hen we were planning, ICC assistant editor @IDieClassy [Andrea Purcell] was like ‘This project is either gonna go amazing because everyone will be so happy and relieved, or it’s gonna go amazing cuz people will be beyond depressed and DESPERATE for escapism,'” Trotman wrote.

Head over to Smut Peddler Presents: Sordid Past’s Kickstarter to pledge, or head on over to the Iron Circus Comics website to purchase one of Smut Peddler’s prior issues.

The Daily Dot reached out to Iron Circus Comics for comment.

Update 11:52pm CT, Nov. 18: When reached for comment, Trotman told the Daily Dot that Iron Circus Comics keeps a “running, mental list” of potential Smut Peddler themes. The comics team then decides which ones to choose based on whether fans will enjoy the topic, if there are any artists fit for the theme, or if the topic will excite creators.

“But frankly, the historical romance theme was an easy one to settle on,” Trotman said. “That was something EVERYBODY wanted to see!”

She said readers are “hungry for escapism,” particularly in 2020. This year has been Iron Circus Comics’ best yet, with the company performing well with sales on both Kickstarter and in distribution sales. She believes Iron Circus’ adult material is “a big part of that.”

As for newcomers interested in creating their own kinky queer adult comics anthology, Trotman has a few words of advice: Get everyone on a contract, plan for everything in them, make sure your anthology is ready for promotion on Kickstarter, and take into account some of the legal issues with 18+ art. Trotman, for example, says she shies away from depicting fetishes “that are in a gray area, legally.”

“I may be an Internet bad ass bigmouth on Twitter or whatever, but I do NOT want to go to jail. And at least one cartoonist who drew and published weird stuff has!” Trotman said. “So, you know. Maybe rethink that blood play or knife play anthology. Or at least be REAL CAREFUL who you sell it to.”