“I’m not at all a fan of small penises. I’m a size queen,” Tanya tells me. She’s a police dispatcher in the Bronx with flawless skin and a shaved head, and she’s drinking a pina colada with a plastic pink dick straw. “I like to feel my partner. I like to have girth.”

“What would you do if you ever dated a guy with a small penis?” I ask.

“Now, everyone in my life knows I have a small penis. But it also means I don’t have to hide anymore”

If Tanya was truly a size queen, last Saturday she was at the wrong venue: the Third Annual Smallest Penis in Brooklyn contest at the Kings County Saloon in Bushwick, where dozens of sweaty bodies pile atop one another like matchsticks to sip penis coladas and celebrate tiny male members.

This year, the theme is “space/Star Wars,” which is mainly an opportunity for MC Chicken Bitches to grace the stage in various elaborate Barabrella-inspired ensembles.

There are five contestants: Rip Van Dinkle, a former contestant who looks like a ZZ Top member on methadone; the Puzzle Master, a doughy white guy who competed last year; a man who calls himself Cromwell because he “makes kings’ heads roll;” the Gentleman, whose lascivious leer indicates he’s anything but; and Chimo Loco, who makes the crowd go wild when he announces, “I’m Chinese, and I have a small dick.”

“Eggroll!” a girl in the audience calls out to Chimo Loco with a happy-drunk tone. 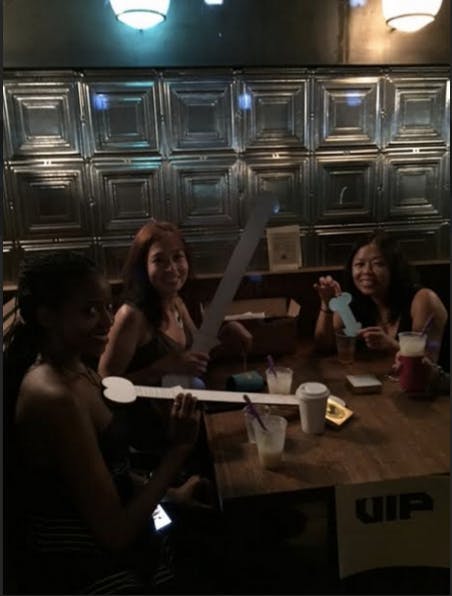 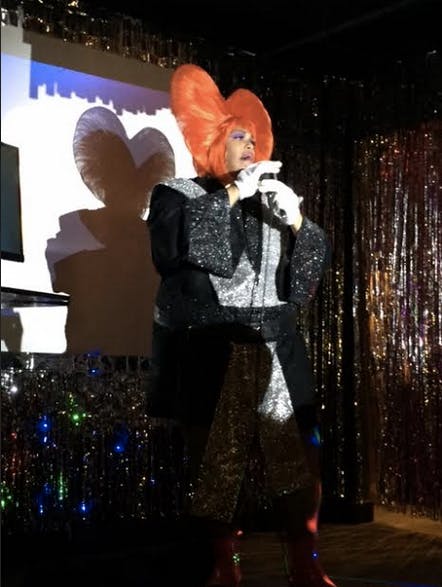 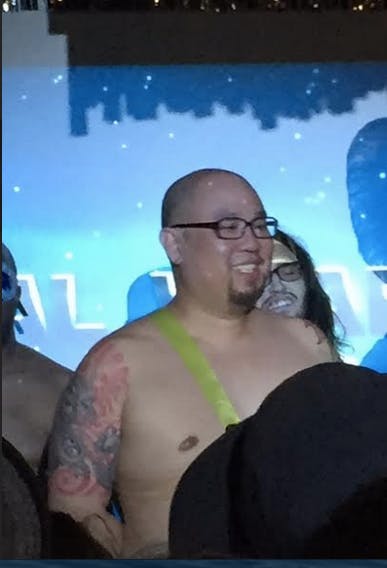 The Smallest Penis in Brooklyn Pageant was created by Kings County Saloon staff members three years ago, when some of the female employees were comparing notes about former partners’ dick length.

“They said the best experiences they’ve had have been with guys with smaller-sized penises, because they really went the extra mile,” bar owner Jesse Levitt tells me. “They know they can’t get by on the size of their penis, so they’re creative and putting more of themselves out there. We really wanted to create an event that recognized and celebrated guys with smaller penises.”

So how small are these penises, exactly? Even as an event attendee, it’s difficult to say. While all of the contestants are clad in translucent latex banana hammocks, the crowd is too thick to inspect the full extent of their shortcomings (though I am assured by Levitt prior to the event that all could probably qualify as micropenises—“they’re all very, very small, we’ll leave it at that.”)

But either way, it doesn’t really matter. To paraphrase Martin Luther King, Jr., the winner of the Small Penis Pageant is not selected based on the size of his member, but by the content of his character.

“You have to be small to enter. That’s sort of a relative thing,” Levitt says. But like Supreme Court Justice Potter Stewart’s definition of pornography, “you know it when you see it. The goal is for them to go up there and show off who they are as a person, and the audience will fall in love with them.” Last year, the winner was Raj Kumar, a Fulbright scholar who won the crowd over with his Bollywood dance moves; the year before, says Levitt, the winner got a few ladies’ numbers after his coronation. 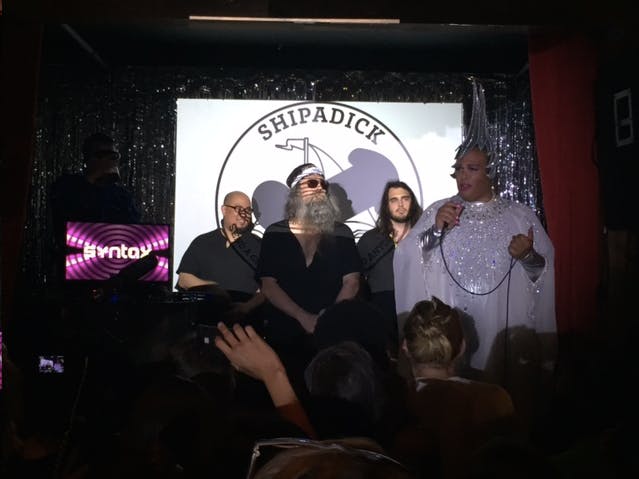 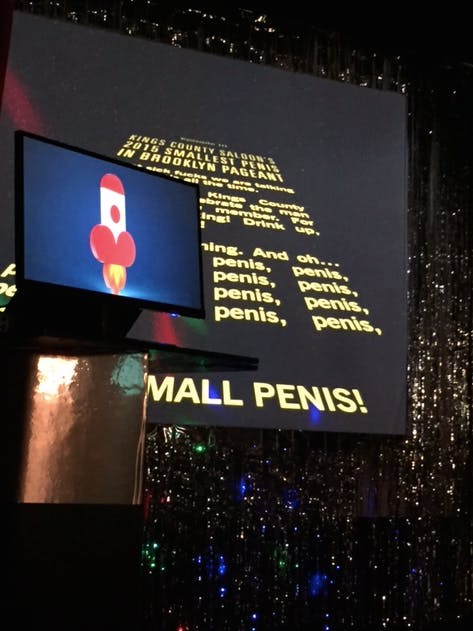 At first blush, parading a bunch of tiny-phallused exhibitionists onstage for the amusement of inebriated hipsters might sound at best exploitative and at worst cruel. But Levitt and Chicken Bitches, who has been hosting the show since its inception, insist that the pageant is anything but. They’re not trying to mock poorly endowed men. Instead, they’re trying to celebrate them.

“We know that some people are gonna come because they think it’s funny, they think it’s cruel, and they wanna laugh at it,” Levitt says. “We can’t control that. But what we can control is the atmosphere we’re creating on stage and the positive vibes there.”

During the pageant, Chicken Bitches, clad in skintight space gear and a Minnie Mouse wig, echoes that sentiment. “If you come here to make fun, you better get the fuck out,” he barks during the show’s introduction. “We’re here to celebrate, not denigrate.”

But there were more than a few people in the audience who appeared to be doing both, especially as the crowd drew more drunk and restless. “Come on, I wanna see small dick!” a girl in a crop top yelled.

When I ask if they would ever date someone who won a Small Penis competition, a group of women who had purchased VIP tickets laughs uproariously.

Regardless of whether the crowd is here to celebrate or denigrate small penises, it’s true that the minuscule member has enjoyed a cultural moment as of late. A recent study reported that 60 percent of women wouldn’t mind dating a man with a small penis, and a viral Buzzfeed listicle from last October explored what it was like to have sex with someone with a micropenis. The consensus was, overwhelmingly, that it didn’t make much of a difference.

“He was a generous and giving lover who cared about my pleasure, cared that I came more often than him (!), and knew how to get me there, and really, what more could a girl want?,” one woman wrote. “So my advice to ladies is: Embrace the micropenis.”

While small penises have recently enjoyed some extra attention, there’s still an obvious stigma associated with them, which is why at least a few of the pageant’s contestants aren’t there to receive validation about their physiques, but to indulge in their fetishes for public humiliation. Last year, for instance, an attendee purposefully defecated himself in public, prompting Chicken Bitches to issue a warning to the audience not to shit themselves during the show’s introduction.

“We do get a number of people with a very particular fetish, that are interested in humiliation,” Levitt says. “We have to say, ‘That’s cool, and if you wanna go up there and have that angle that’s fine, but you have to understand that’s not the goal of the pageant.’”

But if being subject to mockery or sexual humiliation isn’t the impetus for entering a small penis contest, what, then, could it be? The answer seems to vary depending on the contestant. For Cromwell, it appeared to be mere curiosity as to whether or not he had a small dick: “Well, I guess you’ll find out,” quipps Chicken Bitches. And for the lanky, stringy-haired Puzzle Master, it’s besting the competition a year after he’d lost the crowd.

Because the public loves nothing more than a redemption story, it is Puzzle Master who ultimately wins the crowd over, after crooning an ode to his small dick with a “Goldfinger” parody called “Golddinger.” He walks away with a prize of $500 and a light saber in the shape of a cardboard phallus sponsored by ShipADick.com.

After too many penis coladas forces me to vacate the premises early, I wonder whether winning an award for having the smallest penis in Brooklyn could actually be a boon to your self-esteem, as Levitt and Chicken Bitches claim, or if it is just yet another excuse for Bushwick yuccies to don crop tops and day-drink and laugh at people less cool and self-assured than them.

On the way out of the bar, I bump into Basile, a slender Frenchman in his mid-20s wearing jeans and Converse. Basile competed in the pageant its first year, and he says his small penis has affected his personal life and his relationships with women throughout his teens and early twenties, to the point where he’d refuse to shower with his schoolmates during gym class out of fear that they’d taunt him.

When the roommate of an ex-girlfriend suggested he compete in the Brooklyn contest, he wore a mask. He ended up being disqualified for getting too drunk and falling off the stage. (His talent was making fart noises with his hands, in case you’re wondering.) When his photos surfaced online, his friends in France recognized him and mocked him mercilessly. But even though he suffered the dual shame of making a drunken fool of himself and revealing to the world that he had a small penis, Basile didn’t regret it.

“It is a good and bad thing,” he says, staring into his drink. “Now, everyone in my life knows I have a small penis.” Then he brightens. “But it also means I don’t have to hide anymore.”