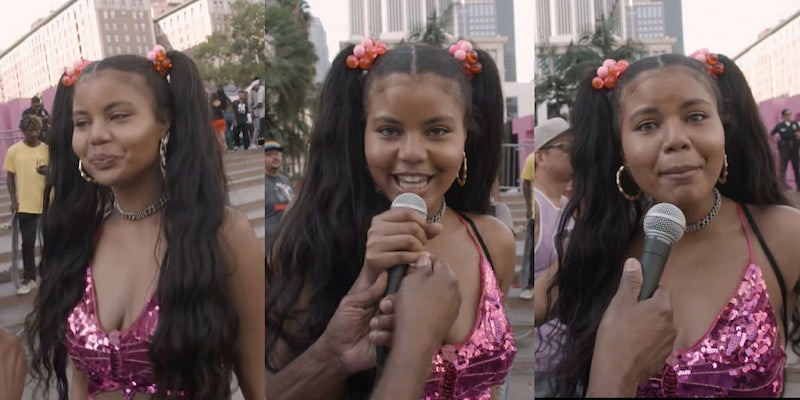 The internet is living for this viral goddess recorded at last year’s SlutWalk tearing down a misogynistic commentator by calling him and his crew a bunch of sluts.

The video, taken at the 2017 Amber Rose SlutWalk in Los Angeles, shows model Samirah Raheem shutting down conservative talk show host and pastor Jesse Lee Peterson as he interviews women on the street, asking them if they’re sluts, if they have had sex with a lot of people, and other questions meant to shame women for taking ownership of their bodies and living how they choose to.

Raheem’s section with Peterson runs from 2:14 to about 4:40. Bless her for engaging for more than two minutes with such a misunderstanding man.

In the video, Peterson begins by asking Raheem if she’s a slut. She takes a breath, waits, and goes right the hell off, saying, “Yes, we are all sluts. You’re a slut, all these dudes behind you are sluts. Your camera man’s a slut, your PA [production assistant]’s a slut. And your mic’s a slut.”

“And what made you a slut?” he continues to ask her.

“Because I own my body. My body is not a political playground, it’s not a place for legislation,” she says without missing a beat. “It’s mine, and it’s my future.”

She then goes on to explain that even though she’s never had sex, a “slut” is not what “you” made it, telling Peterson that it’s what she made it to be: “a boss, getting money, taking the mic,” she says, grabbing his microphone, “turning life around, taking over Hollywood, Samirah right here.”

“It doesn’t matter what a woman’s sexual history is,” she says, before he asks her more questions about God and what’s she’s wearing. “A slut is a just word that you and your fellow penises made!”

It’s clear that Raheem is exhibiting how to reclaim the word slut, to take back a term used to demean women regardless of their sexual history. If they dare expose their knees or shoulders, they’re called sluts. If they’re seen even flirting with someone, they’re sluts. Even if they aren’t “promiscuous,” women are labeled sluts for their choices that reclaim their bodies. And by pointing out how Peterson and his crew are all sluts, Raheem is showing this reclamation in action, reverting Peterson’s toxic definition back onto him and his team.

While the video was taken last October, it appears that Twitter user @CrisLuvsErrBody was the first to share these videos in the past few days. Both he and Raheem did not respond to the Daily Dot’s request for comment.

“Bruh this shit got me in tears,” he tweeted about Raheem’s segment.

Across Twitter, Tumblr, and even Instagram, the internet sang Raheem’s praises, cheering her on for shutting down Peterson and his pointed line of questioning. Supporters are also tweeting praise for Rose’s annual SlutWalks, which protest ending rape culture and promote women’s ownership of their own bodies as opposed to being shamed for bodies and what they choose to do with them.

“God bless her, amen to everything she said and fuck jesse in the striped shirt,” model Justine Mae Biticon tweeted. “The best part about this video is that she answered every single question he asked with depth and all he could do was ask the same question over and over again with more aggression as if it made him the right one.”

“why would god want you to be a slut?”
“he would want me to be whatever I want to be cuz god believes in choice and you should know that jesse thats why you’re allowed to wear this lame ass shirt”

god bless her, amen to everything she said and fuck jesse in the striped shirt https://t.co/VANUMO9rjc

People are completely missing the point of the slut walk. Y'all are quick to judge things without even knowing its sole purpose smh.

We stan a woke queen https://t.co/EeayFlGUDA

I just fell in love. Who is she? I’d like to Internet stalk her. https://t.co/ynfAzReeO3

What is this woman's name?
She deserves all the praise.

And he deserves to be slapped.https://t.co/4YvuZpGDuR

Others have tweeted parts of Raheem’s “slut manifesto,” because even out of context, her responses were not messing around.

ya camera mans a slut

Then there are others who have shut down Raheem’s answers, dismissing her for what they understood to just be a nonsensical rant.

And some took the opportunity to bash Peterson and his politics, as well as the people who think he’s in the right for trying to make women look like fools.

“Black men think Jesse Lee Paterson is so funny being nasty to women at Slut Walks, until he says Black men who ‘resist’ deserved to be shot and killed by the police. And then suddenly shit ain’t no laughing matter,” Twitter user Asia Chloe Brown tweeted. “But he the GOAT now because he was mean at a Slut Walk, lol. Do better.”

Black men think Jesse Lee Paterson is so funny being nasty to women at Slut Walks, until he says Black men who “resist” deserved to be shot and killed by the police. And then suddenly shit ain’t no laughing matter.

Jesse Lee Peterson believes Black ppl are to blame for bad race relations in the USA.

Since going viral, Raheem has received more than 90,000 more followers on her Instagram page, and thanked the internet for their attention to her platform, captioning her latest post, “My body is not a political playground.”

“Growing up it’s been a very interesting journey I’ve always been a walking contradiction. I never thought I’d have a voice like this. I was often ashamed of being opinionated and louder than most. I tried to make myself smaller to fit into social circles. I genuinely thank you guys for your overwhelming love & support,” Raheem wrote.

“There’s no more hiding,” her post concluded. “Thank y’all for forcing me to step into my unapologetic tongue.”