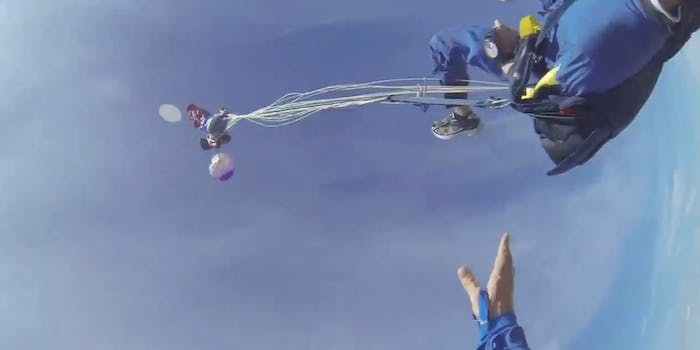 Skydiving hero rescues student having a seizure at 4,000 feet

'Possibly the scariest moment of my life.'

Despite the hours of training that skydiving students undergo, a good diving instructor has to be prepared for the unpredictable.

But nothing could have prepared this jump instructor for one of his students entering a mid-air seizure that left him unable to pull his own ripcord. His amazing rescue at 4,000 feet is one for the record books—and it’s all on video.

YouTube user Nomadic Adrenaline has only one video on his channel—the footage of the terrifying jump, uploaded this morning. In it, we see the student, “Christopher,” go into a seizure and drop into an unconscious freefall while his instructor looks on. Thankfully, after a few heart-stopping failed passes, the instructor is able to reach his student and pull the rip cord before the air current yanks him away again.

The account apparently belongs to “Christopher,” who almost died after going unconscious during the fall. Here’s how he describes the event:

Possibly the scariest moment of my life. On the 14th of November 2014 while doing stage five of my Accelerated Free Fall program I have a near death experience. At around 9000ft I have a seizure while attempting a left hand turn. I then spend the next 30 seconds in free fall unconscious. Thankfully my jumpmaster manages to pull my ripcord at around 4000ft. I become conscious at 3000 ft and land safely back to the ground.

Wow. Even the description is scary. Luckily for Christopher, he had a jump instructor who kept his head. Equally lucky, he regained consciousness in time to land safely, and hopefully enjoy his last few moments in the air.