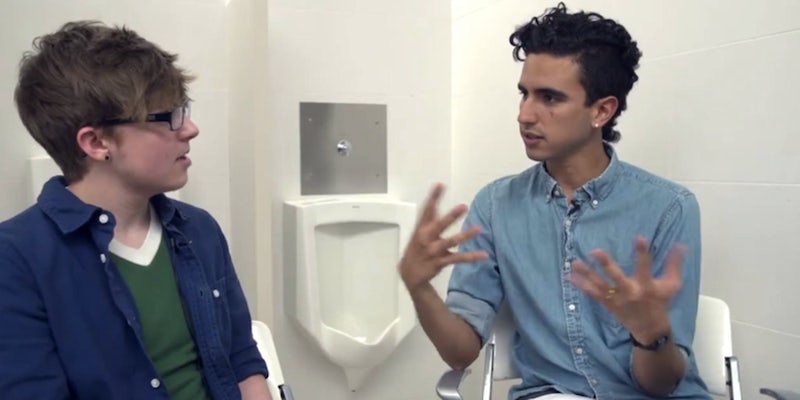 Screengrab via Sitting in Bathrooms with Trans People/Seriously.tv

Nothing is scarier than someone who doesn't wash their hands after peeing.

If you were going to launch a new online talk show where transgender people chat about current events, where would you host it?

In a bathroom, of course—the apex of all the controversy sweeping the nation around state policies impacting trans people.

Sitting in Bathrooms With Trans People is a new show on Seriously.TV, an online channel featuring news and humor videos. Hosted by Dylan Marron (the genius behind Jane Austen Presents: The Bathroom Bill Saga), the first episode features Marron casually chatting in the toilet with YouTube star Jackson Bird—who came out as trans in a video posted to his vlog last May.

“Everyone is so obsessed with what trans people do in bathrooms,” says Marron at the start of the chat with Bird, followed by a gag where the two eat waffles while standing at a urinal.

Throughout the first episode, Bird and Marron do the silliest stuff that could possibly take place in a public restroom—Harry Potter rituals, getting drunk on beer, ribbon dancing with toilet paper—to illustrate just how not scary it is to hang in a bathroom with a transgender person. At the very end of the video, a guy walks in during Marron and Bird’s convo, pees at a urinal, and leaves without washing his hands. Talk about terrifying.

The series arrives just in time to address the height of trans bathroom panic, inherent in “bathroom bill” legislation like North Carolina’s H.B. 2 that mandates all people within the state use restrooms that correspond with their gender at birth rather than their current gender.

As a result of laws like H.B. 2, the rhetoric of horror around unexpectedly encountering a transgender person in a public restroom has spread—but what about the encounters trans people themselves have to endure? Bird, who came out as trans just one year ago, addresses the anxious process of switching over from the ladies room to a bathroom full of men.

“There is the added pressure of like, maybe you have to use the stall, and are people gonna think something,” said Bird in the video, who then joked about the system he uses to make his consistent use of the stall (as opposed to the urinal) less noticeable.

“In the women’s restroom, if you were gonna fart, you kinda hid it,” Bird said. “But in the men’s restroom it’s like, ‘I’m just gonna let it rip so people think I’m pooping, and they won’t think it’s weird that I’m using the stall.'”

If you thought sharing a crowded Target bathroom with a person born with different genitals than you was terrifying, try forcing a fart. Now that’s scary.