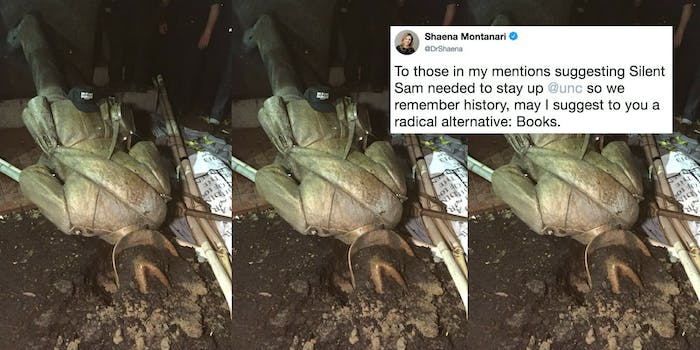 What a way to start the semester.

Another Confederate monument has been removed from a public space overnight, but not at the decision of those who had the power to remove it. Instead, more than 200 protesters watched on and cheered as others pulled down the monument, a statue known as “Silent Sam” at the University of North Carolina Chapel Hill, ending its more than 100 years on the university’s grounds.

On Monday, protesters marched across the Chapel Hill campus to the base of the statue, protesting the statue and its perceived tribute to white supremacy, the New York Times reported. The United Daughters of the Confederacy had commissioned the statue and erected it in 1913, a monument to students who had fought for the Confederacy.

Protesters were also marching in solidarity against the potential expulsion of student Maya Little, who had poured red paint and blood on the statue earlier this year in a direct reference to how the statue was defaced after Martin Luther King, Jr.’s assassination in 1968.

After 9 p.m., demonstrators used ropes they had hidden behind banners covering up the statute’s image in order to topple the monument. Behind them, onlookers cheered and embraced, clapping and jumping at the statue’s fall.

Silent Sam is down pic.twitter.com/mUqf7NkS0A

The toppling came the night before the first day of classes for the fall 2018 semester. The university’s administration had been resistant to taking down the monument, stating that it didn’t have the authority to make such decisions according to state laws and needed the approval of a separate panel. According to WNCN TV via CBS, the statue was scheduled to be discussed for the first time on Wednesday, though the state panel told the Times it hadn’t received any request from the university system.

After the statue’s fall, more students came out to see history unfold. Others shoveled dirt on top of the monument and stomped on it, WRAL reported. Protesters left the statue shortly after police began surrounding the toppled monument, and marched down streets along the campus. The statue was loaded onto a truck later that night and taken to an “undisclosed location,” according to campus paper the Daily Tar Heel.

The doors are closed and Silent Sam is being driven away to an undisclosed location. pic.twitter.com/ZB8xGkeQhn

Efforts to remove the statue had “accelerated” over the past year following the fatal protest against white supremacy in Charlottesville, Virginia, last year. In the weeks following the death of Heather Heyer, student protesters hosted a sit-in protest at the statue, with the intention to have the monument taken down.

We're sitting in until the racist statue comes down. If you want to join us, or have questions, please contact [email protected]

The university has characterized the actions of the protesters as “unlawful and dangerous,” releasing multiple statements regarding the monument’s toppling. According to university chancellor Carol Folt, the police are investigating the matter for vandalism.

The office of North Carolina Gov. Roy Cooper, who called for the statue’s removal, released a statement decrying the “violent destruction of public property,” stating it has “no place in our communities.

A statement about the Confederate Monument at UNC-Chapel Hill pic.twitter.com/7D45yiAAeb

A message from Chancellor Folt on the Confederate Monument: https://t.co/Qp42b6410P pic.twitter.com/T3HoBCEfXw

Across Twitter, many supported the toppling of the statue, tactics aside.

This Tarheel grad is watching from the other side of the Earth with pride. The courage. The strength. You did that!! Venaka, from Fiji. #silentsam

To those in my mentions suggesting Silent Sam needed to stay up @unc so we remember history, may I suggest to you a radical alternative: Books.

Fuck yeah: protesters at UNC-Chapel Hill have torn down another monument to white supremacy. Silent Sam is down! pic.twitter.com/qpiQALJuxr

one of the great things about being in power is that you get to cast challenges to that power, however legitimate, as violent & reckless while framing your passive endorsement of the status quo (backed by the *threat* of state violence) as a commitment to peacekeeping https://t.co/I7bWHS23Ew

Despite the negative comments bashing the protesters who took down the statue, some of these comments, calling for students to be hanged in the street as a “better use for those ropes,” show exactly why a statue dedicated to people who fought for a racist, antiquated concept of white superiority should have been brought down in the first place.

This is why Silent Sam had to come down! Comments on @dailytarheel feed on Silent Sam suggesting or calling for the lynching of protestors. #silencedsam pic.twitter.com/JQNJjjYkAH