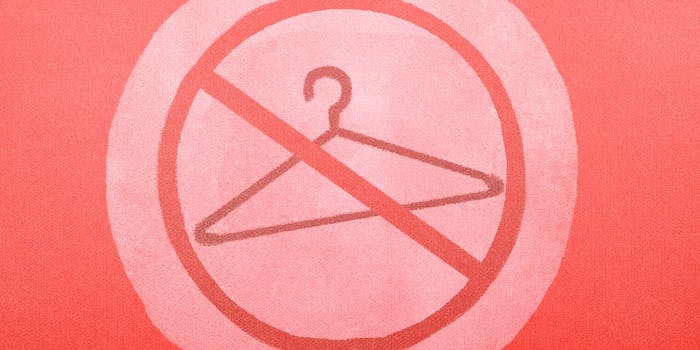 How #ShoutYourAbortion will become an even bigger movement

Amelia Bonow wants to continue changing the stigma around abortion.

#ShoutYourAbortion spread like wildfire across social media this fall. Now the concept is on its way to becoming a full-fledged organization.

When Seattle’s Amelia Bonow wrote a September 19 Facebook post about the abortion she’d had at Planned Parenthood, she couldn’t have predicted the impact it would have. But that post, and her sign-off hashtag #ShoutYourAbortion, sparked an online women’s movement dedicated to de-stigmatizing the abortion experience. 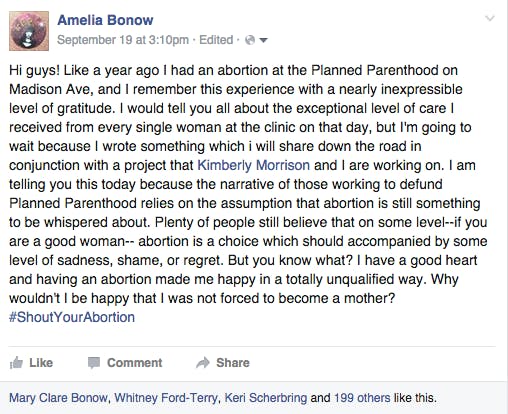 Within days, women were posting their own abortion stories all over social media using the hashtag. Abortion being the contentious and controversial subject it is, the backlash from anti-abortion activists was intense. Women who used the hashtag were harassed and shamed online and Bonow became the target of frightening threats that, according to the Los Angeles Times, caused her and her boyfriend to temporarily flee their home for safety reasons.

Now, Bonow and friends want to extend the moment of visibility and empowerment by making #ShoutYourAbortion a full-time campaign. Through an Indiegogo fundraiser, Bonow hopes to raise enough funds to launch a web platform, host events across the nation, and organize simulcast discussions “where SYA members could participate in dialogue about abortion and reproductive health access, raising concerns that are specific to their communities.”

“#ShoutYourAbortion engaged users in a deep and personal way,” wrote Bonow on the fundraiser page, continuing:

“The question is, how do we translate all this energy—and this new perspective on how abortion should fit into American society—into a long-term plan of action? The next incarnation of SYA will be a full-fledged movement, a network dedicated to de-stigmatizing the experience of abortion and working to expand access to reproductive health care to all women in the United States.”

In the four days since Bonow launched the Indiegogo fundraiser, #ShoutYourAbortion has already raised $8,947 out of a $100,000 goal. That’s not too surprising, considering that the hashtag’s popularity (and blowback) was front-page news on the New York Times, the Los Angeles Times, and the Guardian—as well as being covered by pretty much every major news site in the world.

The spread of #ShoutYourAbortion was so rapid that a Stanford computer scientist made an incredible GIF showing its hour-by-hour transformation, color-coded to illustrate the amount of tweets representing feminists, conservatives, and people associated with the anti-feminist GamerGate movement.

Online, women are still telling their stories across all of #ShoutYourAbortion’s social media profiles. The stories range from harrowing (with women citing rape and domestic violence as motivations for the procedure) to nonchalant.

Perhaps the thing that was most powerful and surprising about #ShoutYourAbortion bringing so many anecdotes to light is the fact that many women have had abortion procedures without feeling the kind of complex emotions and regret that have become part of the abortion mythology. Sometimes, an abortion is just a relief. Regardless of each women’s individual experience, #ShoutYourAbortion has provided a much-needed platform for talking openly about the procedure without shame or silencing—and that’s why it is here to stay.