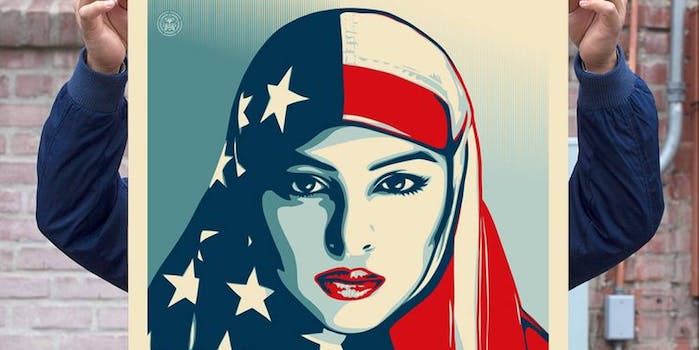 Shepard Fairey plans to plaster D.C. with ‘We the People’ posters

Artist Shepard Fairey will be “celebrating” inauguration with a series of new posters featuring traditionally marginalized groups that he hopes will be spread across Washington, D.C., as Trump gets sworn in.

The “We the People” series is the work of Fairey, Jessica Sabogal, and Ernesto Yerena, and they’ve raised over $420,000 on Kickstarter to take out full-page ads with the posters in the Washington Post. “On January 20th, if this campaign succeeds, we’re going to take out full-page ads in the Washington Post with these images, so that people across the capitol and across the country will be able to carry them into the streets, hang them in windows, or paste them on walls,” they write. “Every dollar you put into this campaign will buy six ads printed and distributed for us.”

Though the official Women’s March website notes that at the march “Posters and signs are allowed, but not with the use of wooden sign posts. Instead, we encourage people to use cardboard sign posts.” So if you want to bring one of these to the march, keep that in mind. Either way, D.C. will probably be plastered with these pretty soon.