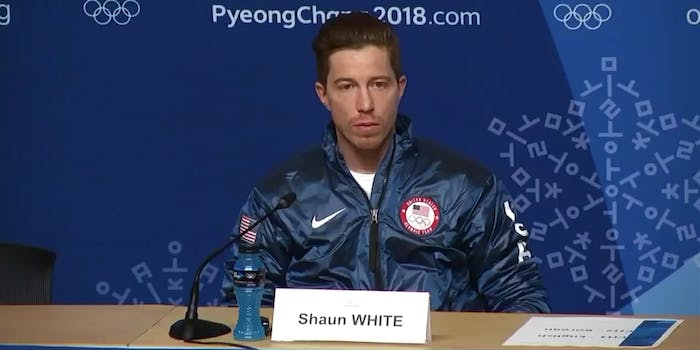 Try much, much harder.

“Honestly, I’m here to talk about the Olympics, not gossip,” White said at a press conference, on Wednesday morning. “I am who I am, and I’m proud of who I am and my friends love me and vouch for me and I think that stands on its own.”

But the allegations are much more complicated than mere “gossip,” especially in the wake of Me Too and the dismissiveness against harassment and assualt it has exposed. In May 2017, White reached an undisclosed settlement in a lawsuit filed by Lena Zawaideh, his former bandmate in Bad Things. The suit alleged that White sent her explicit text messages, made her watch disturbing pornography, demanded she change her appearance, threatened to slap her, and forced her to smell his hands after putting them in his pants.

After much scrutiny, White later apologized on Wednesday for downplaying the allegations, blaming his high from winning the gold medal during the men’s snowboarding halfpipe for his original statement.

“I’m truly sorry that I chose the word ‘gossip.’ It was a poor choice of words to describe such a sensitive subject in the world today,” White said on Today. “I was so overwhelmed with just wanting to talk about how amazing today was and share my experience.”

“I’m truly sorry that I chose the word gossip. It was a poor choice of words to describe such a sensitive subject in the world today.” @shaunwhite on his remarks at news conference when asked about harassment case pic.twitter.com/5q9jyCL61m

But White didn’t necessarily apologize for his depicted actions in the suit or admit wrongdoing. He simply argued that he’s changed for the better since the lawsuit’s events allegedly took place.

“I’ve grown as a person over the years,” White said to Savannah Guthrie. “I definitely feel like I’m a much more changed person than I was when I was younger. I’m proud of who I am today.”

Learning How to Apologize 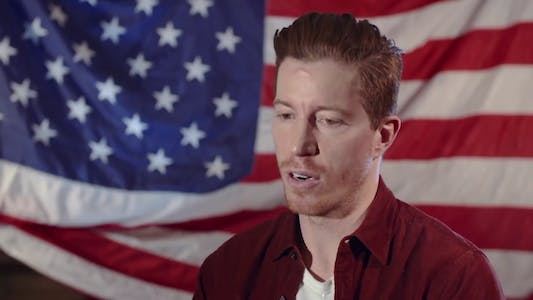 Plenty of powerful men have been implicated in sexual harassment lawsuits over the past few years, and some of those allegations are only just coming to light. But in most cases, harassers don’t offer accountability for their behavior. Or if they do, their apologies are lackluster at best.

Back in late 2017, the Me Too movement grappled with this issue with #HowIWillChange and #IveDoneThat, two hashtags in which men admitted that they know perpetrators and may have engaged in sexual harassment themselves without realizing it.

At first blush, the hashtag encouraged men to admit wrongdoing and work on bettering themselves, which is a pretty noble intention that encourages accountability. But the tags quickly let men push aside their pasts while acting like feminist allies. It’s much easier to ignore sexual harassment if the perpetrator insists that they have “changed” or “are changing.”

In reality, the truly remorseful won’t necessarily ask for redemption unless they’re willing to hold themselves responsible for their behavior. The two hashtags quickly died out because it seemed men only wanted to signal their change, not necessarily tackle their past misconduct.

In a similar way, feminists fear White is trying to run away from the settlement and move on without directly addressing the allegations. By simply stating that he’s “changed” and that he’s “grown as a person” and dropping the subject, White’s apology isn’t really much of an apology. It’s an excuse.

As one Twitter user complained, “@SavannahGuthrie gives @shaunwhite every chance to apologize for the nasty things he did and all he can do is grandstand for himself.”

Shaun White after press conference, refusing to address allegations about sexual harassment: “I was so overwhelmed with just wanting to talk about how amazing today was and share my experience." Translation: I only want to talk about how awesome and godly I am 🙄🤮

As many centuries of silence and dismissal have proven, sexual harassment and assault are difficult to talk about. Apologizing isn’t easy, either. But there are proper ways to do it. When Harmon was both privately and publicly called out by writer Megan Ganz for harassing her, he didn’t just admit that he’s changing. He encouraged other harassers and potential harassers to stop hurting others and think about their actions.

“No matter who you are at work, no matter where you work, in what field you’re in, no matter what position you have over, under, or side by side with somebody, just think about it,” Harmon said during his Harmontown podcast. “Because if you don’t think about it, you’re going to get away with not thinking about it and you can cause a lot of damage that is technically legal and hurts everybody.”

Of course, Harmon’s next step should be to do the real work: promote and empower women, even put his money and time where his mouth is. Apologies may be difficult, but they have to be heartfelt and be backed with action. If White wants to seriously move on from the allegations, then he has to be honest with himself—and the public.