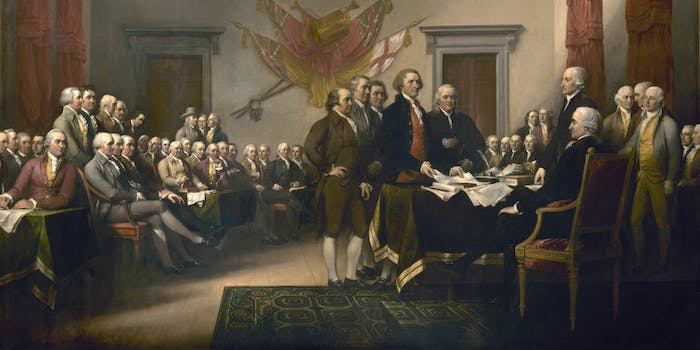 'Let me teach you something,' he wrote in the since-deleted tweet.

Shaun King is facing backlash on Twitter after appearing to try to pass off a historian’s work as his own.

On July 4, King shared a version of John Trumbull’s “Declaration of Independence” painting that had red dots over the faces of slaveowners who were present for the momentous event.

“Every man with a red dot on their face who signed the Declaration of Independence OWNED and enslaved Africans,” he wrote. “Over 75% of them. The rest permitted it.”

It’s an important fact of history to consider on Independence Day—that the independence declared in 1776 was only that of white male Americans, while Black people were still enslaved.

But the problem with King’s tweet lies in the first half.

“I’m a historian by training. My undergraduate and graduate degrees are in history. Let me teach you something,” he wrote, prior to launching into the explanation.

Though King did not explicitly claim to have created the image that followed, he set expectations up in a way that many felt insinuated it was his own creation, or at the very least, he hoped people would assume as much.

However, the research of which Declaration of Independence signers owned slaves, and the placing of red dots over their faces, was actually done by documentarian Arlen Parsa and shared to Twitter last September.

“Hi, thanks for reposting the thing I spent quite a lot of time researching and making last fall!” Parsa wrote in response to King’s tweet. “I don’t mind that you reposted it— everyone is free to share it. I would love a shout out or some kind of credit though.”

Criticisms quickly poured in, with many noting this is far from the first time King has been accused of trying to pass someone else’s work off as his own.

“This is so on brand for Shaun King,” wrote Imani Gandy. “He’s been taking credit for Black women’s work for YEARS.”

“King not *explicitly* taking credit for someone else’s work, but letting the implication that it’s his own work just hang out and chill is VERY on brand,” added Naima Cochrane.

King has a long history of controversy, much of which surrounds numerous fundraisers he’s spearheaded that have left many with questions as to where the money actually wound up. He has previously been accused of “jumping in to capitalize on” various crises and threatening people who have questioned him.

“He often bullies and intimidates those who ask questions at all, turning his ire especially at Black women, attempting to scare inquirers into silence,” activist DeRay Mckesson wrote last year.

King eventually deleted his tweet about the Declaration of Independence, hours after Parsa claimed credit, and after his tweet linking his original post gained over 28,000 shares. But as of this time, King has yet to respond to Parsa or comment on the incident.