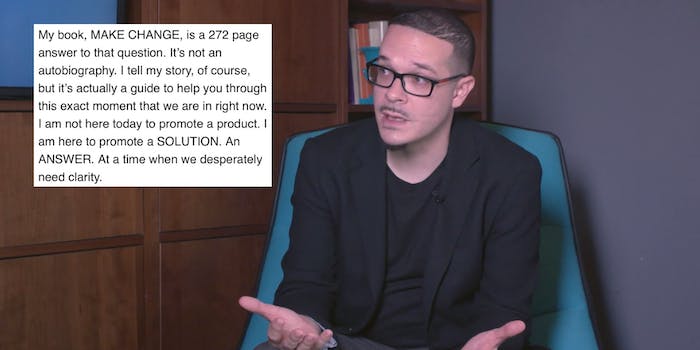 'I'm so tired of Shaun King profiting off of Black death.'

Political activist Shaun King stirred controversy over the weekend after allegedly using the death of actor Chadwick Boseman to sell his book.

Boseman, who passed away on Friday after a years-long battle with colon cancer, was reportedly mentioned by King in a recent email sent to his supporters.

“Hello My Friend,” the email reads. “I hope that you are hanging in there. Yesterday I sent an email checking in on everybody – and just a few hours later we learned of the death of Chadwick Boseman.”

After stating that “life is so very fragile” and that “tomorrow is not promised,” King apparently proceeded to use the opportunity to plug his book.

“I am not here today to promote a product. I am here to promote a SOLUTION,” King claims. “An ANSWER. At a time when we desperately need clarity.”

King, who goes on to allege that he doesn’t make a “dime” from book sales due to already being paid last year, includes links to purchase the item on Amazon and other book sellers.

No stranger to controversy, King and the email were immediately met with widespread backlash online.

King has thus far not commented publicly on the criticism.

But King is not the first person to be called out for allegedly capitalizing on Boseman’s death.